Our Program in Lebanon 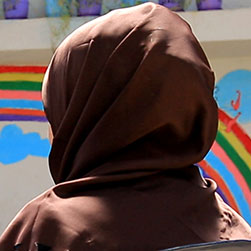 “When I fled Syria, it was very difficult. I arrived in Lebanon as a refugee, and it was even harder to be perceived as an immigrant asking for aid. But then I took part in workshops and I gained knowledge and skills. I started to believe in myself and I discovered that nothing is impossible. My hope is to leave an impact as a refugee, so my days as a refugee will not have been for nothing.”
Qawthar, a Syrian refugee in Lebanon’s Bekaa Valley.

You will find the same video in Hamda’s testimonial.

Striving for peace after fleeing war

Qawthar’s experience is like that of many refugees who after having endured war, hunger and poverty in their homeland, find the courage to leave, but then face new struggles in their host country. In fact, 85% of the world’s refugees are being hosted by the poorest countries on the planet, and the arrival of refugees can create tensions over the sharing of already scarce resources.

This is particularly true in Lebanon, which is currently hosting 1.5 million Syrian refugees, almost one third of the Lebanese population. The country, which is still healing from a divisive civil war that ended in 1990, faces its own challenges, such as a fragile democracy, a high unemployment rate amongst youth and strained public services.

The work of HOPe

HOPe, a Development and Peace partner, is fostering social peace between diverse communities. HOPe organizes 3-day workshops that bring participants on a journey, where by the end they are equipped with tools to manage conflict and have gained new perspectives on peace.

Once individuals have gone through the social peace workshop with HOPe, they are invited to develop an initiative that will promote peace and social cohesion. This can range from building a community space in a refugee camp to baking bread and distributing it to neighbours to give thanks for their hospitality.