After the Storm - Philippines' Documentary 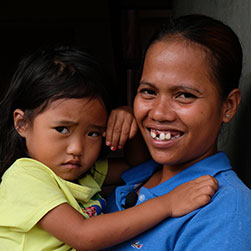 “I didn’t see my house anymore. When we went back, it was full of water. No houses were left standing. We were living in a tent made out of tarps, and plastic for the floor. It gets very hot and insects can easily get inside, as well as rats. Water also easily gets inside. It’s so hot, like bread in an oven. We can’t stay inside very long. It’s like being roasted. We had no idea how to get help, or where to ask.”

Climate change is one of the main drivers of forced migration in the world today. According to some estimates, water scarcity, crop failure and rising sea levels could cause up to 143 million people to be displaced by 2050.

Poor coastal communities in the city of Tacloban in the Philippines already know this oncoming reality all too well. In 2013, they experienced the wrath of Super Typhoon Haiyan, whose 300 km/hr winds created a storm surge that swept away entire communities. In total, 4 million people were displaced by the storm.

While some migrated to different regions, others were forced into tents or put together makeshift shelters with scrap materials. Communities were also confronted with new government regulations forbidding them to rebuild along the coast, where they make their living fishing. Stripped of their homes and their livelihoods, survivors of the typhoon held bleak hopes for the future.

The work of our partners

Development and Peace and its local partners, Urban Poor Associates (UPA), NASSA-Caritas Philippines, the Archdiocese of Palo and the Congregation of the Holy Redeemer, were determined to break the cycle of poverty that made communities vulnerable in the first place. They formed a consortium and purchased a piece of land for the construction of a permanent resettle¬ment site that would involve the full participation of communities in trans¬forming the land into a new village.

The film After the Storm: Building the Pope Francis Village follows the inspirational journey of these communities as they are empowered to build a future where they no longer must live under the threat of having to flee their homes.

Discover all our resources and watch the documentary After the Storm.

20,000 households were provided with shelter assistance.