Our Program in Colombia 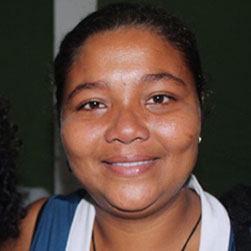 “On the day I was born, my family had to flee because of clashes between the [guerilla group] FARC and the army. Three years later, the conflict calmed down and we were able to return to our land. When I was five years old, we had to flee again. Believing that we were hiding guerrillas, the army gave us 12 hours to leave our homes, after which it would set the village on fire. Five hours later, they started to burn down our houses.”
Kelly Bolano Soto

Building a culture of peace after 50 years of armed conflict

After more than 50 years of armed conflict involving government forces, guerrillas, paramilitary groups and organized crime networks, Colombia signed a peace agreement in 2016. It looked like better days were ahead. But decades of instability and violence have left deep scars on this nation. Colombia today has more than 7.7 million internally displaced persons, one of the highest numbers in the world, and the implementation of the peace agreement is on shaky ground as the new government of Yvan Duque plans to review it.

Peasant, Indigenous and Afro-Colombian communities have been especially affected by the years of conflict. Violence, assassinations, disappearances, forced displacements and land grabbing have had an impact on these groups.

Women have suffered many kinds of violence at the hands of armed groups and from members of their own communities. This violence has long been hidden or ignored. The lack of women’s economic, social and political rights is reflected in the marginalization of women when it comes to participating in the political and economic life of the country.

The work of NAC

Convinced that women’s participation is key to building lasting peace in Colombia, Development and Peace partner NAC has developed training programs as well as discussion and learning spaces for rural women.

In 2014, the Inter-ethnic Political Training School for peasant, Afro-Colombian and Indigenous women was established. There, women can learn the necessary skills to engage in credible dialogue with government authorities. By introducing women to the methods they need to reclaim their rights, their territory and their dignity, NAC is fostering an inclusive, participatory and democratic society.