Our Program in Nigeria 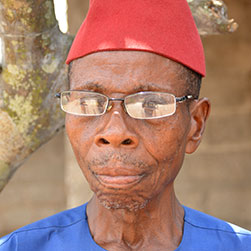 “It’s rather unfortunate that the police got involved. We weren’t asking for much, just roads, electricity, and water. We elders had the opportunity to go to school, but our children are not educated due to a lack of resources because we’ve been impoverished.”

Amaechi Raymond, president of the Umuechem Council of Elders.

On October 30, 1990, members of the community of Umuechem, located in the Niger Delta, organized a peaceful march in an effort to claim their share of profits generated by more than 30 years of oil exploitation on their lands. Community members were disillusioned with the unfulfilled promises of Shell Nigeria. Faced with poverty and the pollution of their territory, young people, women and men decided to call for justice. They had already tried, unsuccessfully, to establish a dialogue with the oil company.

In response to the community’s march, Shell Nigeria contacted police authorities and falsely reported that their oil facilities were being attacked. Members of an elite police combat unit were quickly sent to the site. More than 300 people were killed and 495 homes burnt down. The survivors faced unparalleled devastation.

Traumatized by the massacre, almost all the survivors fled to neighbouring communities and have never returned home. A judicial commission of inquiry was set up in response to the outcry that followed the Umuechem massacre, but to no avail. To date, no compensation has been offered to survivors; none of the perpetrators of the murders have been brought to justice; and Shell Nigeria continues its extractive activities on community lands.

The work of Social Action

In 2014, members of the community of Umuechem contacted Development and Peace’s partner Social Action, which is known for its work with Nigerian communities affected by oil exploitation. More than 20 years after the massacre, the community was ready to take the oil company in question to court to demand compensation.

To end the impunity that Shell Nigeria has been enjoying, the community is taking the company to court in the Netherlands, where their headquarters is located. Social Action is working with human rights lawyers to assemble the necessary evidence to file the petition in court in 2019. The community is hoping that their story will never be forgotten.