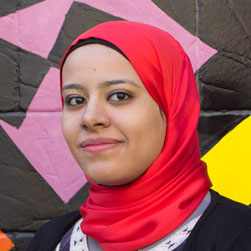 “Dialogue is a way to build ties and trust between myself and another, and to better understand and accept one another. I am responsible for sharing my ideas and receiving the ideas of others. The link between dialogue and peace is essential.”

“The existence of an institution such as Adyan, based on values such as diversity and harmony, inspires me to keep faith that peace is possible. I would like to thank Development and Peace, which supports the recognition of diversity.”

Rasha is from Cairo, Egypt. As a young graduate in sociology and political sciences, she now works as a Human Development Trainer and Counselor. As her interest in inclusive citizenship grew, she decided, in September 2017, to participate in a training for trainers being offered by Adyan in Morocco. She says that it’s Adyan’s approach to social and religious issues that convinced her to participate in theworkshop and become a trainer herself.

With support from Development and Peace, Adyan runs a wide range of programs that include conferences, trainings for educators, building networks of interfaith leaders and workshops on peace, reconciliation and coexistence. They also launch clubs in secondary schools that encourage inclusive and active citizenship.

from six different countries have participated in local trainings.