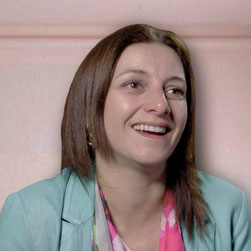 “We need to unlearn negative approaches to diversity such as stereotypes and prejudice so that we can fully appreciate one another and build a country where diversity is valued. Adyan offers a safe space where youth can express their religious and philosophical beliefs without the fear of being labeled or criticized. (…) What is beautiful, is that in our religious texts, whether Christian or Muslim, it is God who wants us as ‘one’ yet diverse. All acts that allow us to move in that direction are part of the spiritual experience of Lent.”

Nayla Tabbara holds a doctorate in religious studies. In 2006, she co-founded Adyan with Fadi Daou. She is now Director of the Institute of Citizenship and Diversity Management, which is the academic branch of the Adyan Foundation.

With support from Development and Peace, Adyan runs a wide range of programs that include conferences, trainings for educators, building networks of interfaith leaders and workshops on peace, reconciliation and coexistence. Adyan also launches clubs in secondary schools that encourage inclusive and active citizenship.

from six different countries have participated in local trainings.