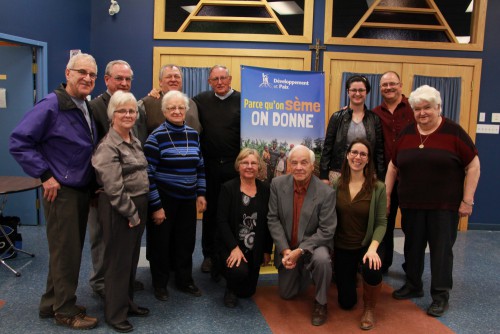 If Bishop Eugenio Rixen has one message that he hopes to share with Canadians during his solidarity visit to Canada, it’s that faith and action are not contrary to one another, but rather go hand in hand. Bishop Rixen is currently touring Alberta and Manitoba as part of Development and Peace’s Share Lent campaign Sow Much Love… To Give.

Bishop Rixen, who is originally from Belgium, has been living out his faith in action for the 35 years he has been in Brazil. He is bishop of the Diocese of Goias, where Development and Peace is working extensively with the Pastoral Land Commission (CPT) on issues linked to land and agriculture.

“Goias is marked strongly by land struggles,” explained Bishop Rixen. “There are strong tensions between family farming, which is for feeding families, and agri-business, where crops are purely for export.”

The CPT is working to defend family farming and ensure that it can thrive. They do this in three ways:

1.    Helping small family farmers gain access to land through a government land reform program.
2.    Providing technical support so that families can produce food that they can also sell at the market.
3.    Organizing people into cooperatives and associations, which can help them with the sales of their produce and to access government services and grants.

Bishop Rixen has witnessed how arduous it is for the most poor and vulnerable in Brazil as they confront the structures of injustice that keep them off the land.  Even the government’s agrarian reform program is a long and trying process.

The aim of this agrarian reform is for the government to take possession of large tracts of land that are left in disuse by absent landowners or are being used to grow illegal drugs, and redistribute it to small family farmers. One tract of land can benefit as many as 45 families, but it is a process that can take years and requires significant strength and perseverance.

“When people know that a piece of land may soon become available, they get together and camp on the site,” he said. “Often, they must stay on the land 5 to 7 years before the government grants them a parcel. They are farmers who always had to work for others, often in slave-like conditions, and never had a right to land. They are in this struggle and suffer immensely in the process, so they can have land to leave to their children.”

The role of the local Church is to help organize the people and act as an intermediary in negotiations with the government.

Through his work, Bishop Rixen has seen how women, more often than not, are the backbone of these struggles.

“Women are very important in this work. They are very courageous, and show great endurance and resistance. They have such a strong connection with the land and life,” he said.

In the many years he has been in Brazil, Bishop Rixen feels that the country has made some progress in reducing poverty; however, today he sees that as a society, Brazil is moving more and more towards the concentration of wealth with the consequence that an increasing amount of people are being marginalized.

He says that the grassroots organizations that work to counter these trends could not survive without the solidarity of Canadians through Development and Peace.

“Everything that strengthens North-South solidarity is very important and interesting because it works both ways as we learn from each other.”

And just as Bishop Rixen hopes to share his experience with Canadians that faith can and must also be about social engagement rather than just prayer, he himself was actually greatly inspired by a Canadian. He cites Jean Vanier, the founder of the organization L’Arche, as one of his greatest inspirations.

“He showed a radical engagement. We must support all that is for life and struggle for the people. We believe that another world is possible.”