Re-igniting love for the land in Brazil 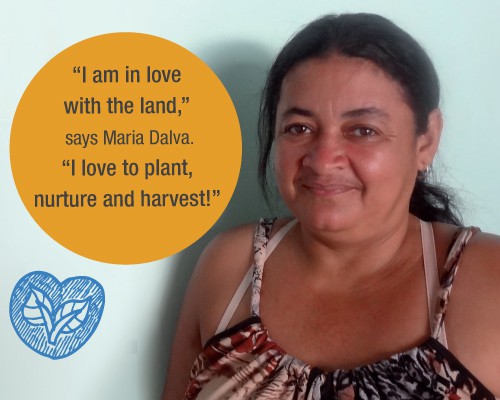 « With support from the Canadian Catholic Organization for Development and Peace, the Pastoral Land Commission (CPT) is taking action against hunger, violence, and the concentration of ownership of land, which oppose God's plans for a more just and compassionate world. »
- Bishop Enemesio Angelo Lazzaris, Balsas diocese in Brazil, President of the CPT

Maria Dalva is a leader of a group of 54 farmers in the state of Para in Brazil. For many in the group, however, their love of the land was threatened by the slave-like working conditions imposed by the plantation owner.

Struggling small family farmers are often lured away from their land by the promise of work on large plantations in remote areas, only to find themselves forced to work long hours for scant wages, and in exceedingly poor and unhealthy conditions.

Development and Peace's partner the Pastoral Land Commission (CPT) in Brazil has been striving to raise awareness of workers' rights and the risks of slave-labour. CPT has been reaching out to farm workers and is working to free those caught in the cycle of slavery.

When Maria learned about the CPT's Slavery No Way campaign, it opened her eyes to this shocking reality. "The lack of information made us blind," says Maria. "Today, I have a different view of slave labour and workers' rights. Our employer will only respect us when he knows that we are aware of our rights."

Maria has shared information about human rights to her fellow workers using CPT pamphlets and posters. According to Maria it is working. She says that there have been no recent cases of slave labor, mainly because the workers are informed about their rights.

Now with support from CPT, she is working to form farming cooperatives to allow small family farmers to access land and earn a fair living, and of course, to re-ignite their love of the land!