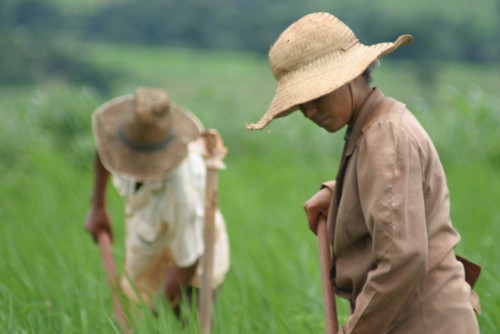 Brazil is proud to be the second largest food exporter in the world, and on the way to becoming the first. Yet, according to the United Nations Organization for Food and Agriculture (FAO), there are 3.4 million people living with food insecurity in the country. How can we explain the existence of hunger in a country that has such immense resources and could even help to end world hunger?

There are three main causes of this injustice:

This reality provokes outrage in those of us who witness it. The Commissão Pastoral de Terra (CPT - The Pastoral Land Commission), which was founded by the bishops of Brazil, is based on the word of the Lord, who said: “I came that they may have life, and have it abundantly,” (Jn 10:10). With support from the Canadian Catholic Organization for Development and Peace, the CPT is acting against hunger, violence, and the concentration of ownership of land, which oppose God’s plans for a more just and compassionate world.

The sole miracle that is recorded in all four gospels is the multiplication of the loaves by Jesus. Through this great miracle, Jesus showed that even if what is shared is little, it is enough to satisfy everyone. But what is most important in what Jesus left us is his presence in the bread and wine that are shared to keep his memory alive. As the first followers broke bread around the table, and shared what they had, there were none left poor among them (Acts 2: 42-47). There is more than enough food in the world to satisfy the hunger of all, if only we made food for all a priority.

Sisters and Brothers of Canada, when we share in the consecrated bread and wine of communion, we are making a commitment to fight hunger and its root causes, which lead to the premature death of children and deprive millions of people of what is necessary to survive. This commitment must always, especially during Lent, be accompanied by acts of solidarity, such as those we have seen through our many years of partnership with Development and Peace.