A healing garden in the Philippines 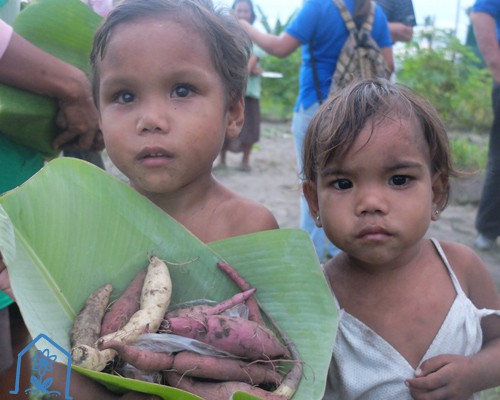 "Your gift of solidarity is a true expression of the Lord's prayer 'Give us this day our daily bread.' That's why the act of giving is truly spiritual.
- Paul-André Durocher, Archbishop of Gatineau and President of the Canadien Conference of Catholic Bishops

At the first hint of a cool breeze from the setting sun, a buzz of activity takes over a small plot of land that faces the sea in the city of Tacloban in the Philippines. The garden is soon full of women and children toiling away under the pinkish hue of the sky – the sign that it is finally cool enough to till the earth, pull up weeds, and tend to the vegetables sprouting from the ground.

All of the women gathered here have one thing in common: they are all survivors of Typhoon Haiyan (known locally as Yolanda). Their district right on the coast was one of the hardest hit by the typhoon. Most now live in tents that grow stifling under the hot sun, and are facing forced displacement by the government, with no idea where they might be relocated. Many are also widows, because their husbands stayed behind to protect their belongings and were taken away by the storm. They struggle daily to provide food for their families.

With the help of Development and Peace partner Urban Poor Associates (UPA), the women formed the Yolanda Survivors Women's Association. One of the first things they did was to create a communal garden. With the assistance of UPA, the association received seeds and farming tools from the government.

Little Jobert Pindos, 4, comes regularly to the garden with his mother. He clutches s a folded palm leaf that holds a multitude of yams that will be cooked for dinner. Jobert is blind and his mother has been struggling to feed him and his sister since they lost their father in the typhoon.

For the women of the association, this garden provides both physical and spiritual nourishment. It is a place where they can come together to laugh, cry and even share a meal. It faces the ocean that was so cruel to them, yet helps them heal and make peace with it. Together, in the garden they grow stronger, seeing that by acting together they can create a better future.