After ten years of mobilizing, Development and Peace – Caritas Canada celebrates the creation of an ombudsperson for mining and other sectors 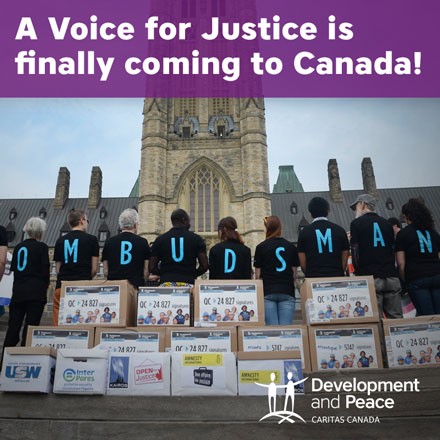 Montreal, January 17th, 2018 – Development and Peace – Caritas Canada welcomes today’s announcement by the Canadian government to create a human rights ombudsperson to oversee Canadian mining, oil and gas operations around the world after ten years of campaigning on this issue. Since 2006, its campaigns for greater accountability in the Canadian extractives sector have garnered the support of 500,000 Canadians.

“This announcement has been a long-time coming and we are happy to see that the government is respecting its electoral promise and restoring Canada’s role as a leader in defending human rights worldwide,” said Serge Langlois, Executive Director of Development and Peace, after the Honourable Minister of International Trade François-Philippe Champagne made the announcement.

Concerns over human rights violations linked to Canadian mining companies began to be raised as far back as the early 2000s, initiating a series of national roundtable discussions that resulted in the recommendation for an ombudsperson to oversee this sector. Instead, the government has been relying on the Office of the Extractive Sector CSR Counsellor and the National Contact Point for the OECD Guidelines to receive complaints from local communities experiencing human rights violations by Canadian extractive companies. These mechanisms, however, have not proven effective in resolving cases since they lack investigatory powers and independence, and are not mandated to recommend remedy.

Over the years, evidence of human rights abuses and violence surrounding Canadian mines has continued to be exposed and has led to:

As a member of the Canadian Network on Corporate Accountability, Development and Peace launched its Voice for Justice campaign in 2013, which highlighted the detrimental environmental, social and economic impacts of Canadian mining companies on mostly poor peasant and Indigenous communities in Africa, Asia and Latin America and mobilized 80,000 Canadians to again call for the creation of an ombudsperson.

“We are confident that the Minister will do what is necessary to ensure that the ombudsperson, like all ombuds offices under the purview of the government, is autonomous and has independent investigatory powers, as well as the required budget to be effective. We look forward to seeing the implementation of this office in the near future,” said Mr. Langlois.