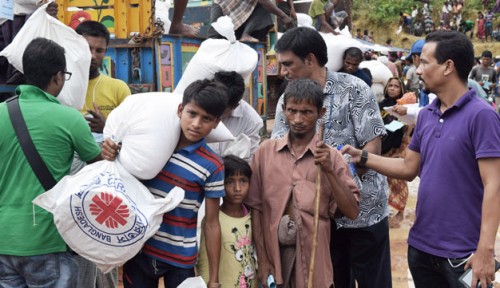 Montreal, December 15, 2017 –  Development and Peace – Caritas Canada wishes to express its heartfelt gratitude to its donors for their quick and generous response to the crisis affecting the Rohingya people of Myanmar.

Development and Peace donors gave $546,820 during the matching period for the Canadian government’s Myanmar Crisis Relief Fund, which ran from August 25th to November 28th, 2017. In addition, Development and Peace received $750,000 from Global Affairs Canada to increase its response to the needs of the Rohingya people. Together, Development and Peace will be able to contribute over $1 million towards humanitarian aid efforts for the most vulnerable.

“The government contribution will go towards a Caritas Bangladesh project that has a total budget of almost $6 million (cdn),” explains Stéphane Vinhas, Humanitarian Aid Programs Officer at Development and Peace. “This project, which will last until the end of August 2018, includes the construction of solid shelters while taking into consideration gender aspects, the construction of latrines and access to clean water, as well as initiatives to help protect children and women, notably the creation of educational and recreational spaces for children and psychosocial support for victims of violence,” adds Vinhas.

Development and Peace will use the monies it raised to complement this project with mid- to long-term actions that will allow the safe, dignified and voluntary return of Rohingya refugees who are in Bangladesh, support to the Rohingya population so they can live in improved economic and social conditions and efforts towards strengthening the country’s democracy so that all its people can live in peace and prosperity.

Over the last few months, conflict in Myanmar has triggered an exodus of 630,000 Rohingya who have taken refuge in Bangladesh. This has led to a humanitarian crisis requiring action from the international community. Sadly, despite the funds made available through the Canadian government’s Myanmar Crisis Relief Fund, the needs of the Rohingya in Myanmar and in Bangladesh remain high. Development and Peace is continuing to encourage Canadians to give towards relief efforts. Donations can be made online at www.devp.org, by mail or by telephone at 1 888 664-3387.

About Development and Peace

The Canadian Catholic Organization for Development and Peace is one of the most established international development organizations in Canada. It was founded in 1967 by the Catholic bishops of Canada to inspire the solidarity of Canadians towards their sisters and brothers in the Global South suffering the injustice of poverty. In its 50 years of existence, it has invested $600 million in over 15,000 development projects in Africa, Asia, Latin America and the Middle East.

It is a strong and diverse movement of Canadians from coast to coast acting for justice so that the poorest can live in dignity and with respect. Development and Peace is the official Canadian member of Caritas Internationalis, a global confederation of over 160 Catholic organizations, and belongs to several national and international networks, including CIDSE and Kairos, to help build a world of justice.