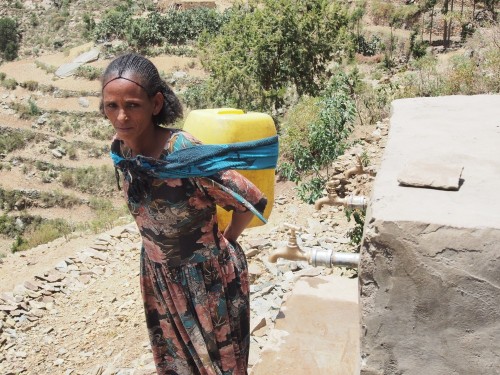 As Ethiopia experiences one of its worst droughts in decades, Development and Peace is responding with immediate aid to help meet the acute needs created by this situation.

Potentially worse than the drought that struck Ethiopia in the 80s and triggered a famine in the country, the current crisis has been brought on by this year’s El Niño. Crops failed due to a lack of rain, leaving an estimated 10 million people vulnerable to high levels of food insecurity and malnutrition, particularly in the northern and eastern parts of the country, and this number could increase to 15 million.

Development and Peace is working with local organizations to provide food aid, access to water, improved hygiene and sanitation and support for re-launching agricultural activities. It is also supporting activities to help with soil conservation and the capture of water. These projects will help 100,000 vulnerable families in the most affected regions.

“The country has barely recovered from the previous crisis in 2011, and now it is being hit again with a terrible drought. The effects of climate change are amplifying the suffering of small family farmers who are highly vulnerable to these climatic disruptions and form a majority of the population. We must act now to ensure that the crisis does not worsen,” says David Leduc, Executive Director of Development and Peace.

Development and Peace has been working in Ethiopia since its founding in 1967, and has strong ties with local organizations that work with the most vulnerable groups. In the last few years, it has increased its presence in the country in response to the 2011 hunger crisis that affected the country. It has been supporting communities in recovery efforts and in activities to help adapt to climate change and improve harvests.

It is expected that needs will remain acute for the next 8-9 months, when hopefully crops will once again be available.