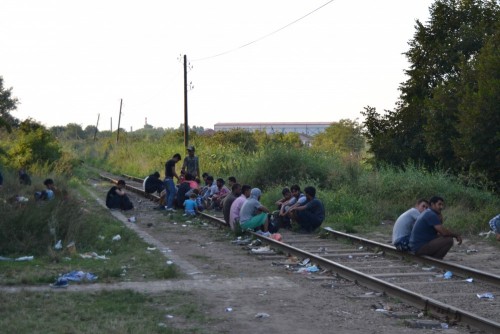 The current refugee crisis that is taking place in Europe requires a global response and Development and Peace is working with its Caritas partners in Europe to help bring relief to thousands of people who are trapped in limbo as they try to escape war, poverty and repression in their countries of origin.

In the last few days, there have been an increasing number of refugees attempting to reach safe ground in the European Union. Tragically, many do not survive what are harrowing journeys by sea or land, as was witnessed by the death of a 3-year-old boy whose family was trying to find refuge.

Development and Peace has already committed $50,000 towards the relief efforts being put in place by Caritas, which include food, shelter and health assistance. These funds will be directed towards Caritas members in countries where refugees are currently trapped at borders.

The majority of the refugees are Syrians, who are fleeing a four-year conflict in their country that has only worsened with time. Close to 4 million Syrians have left the war zone. The crossing to Europe from North Africa over the Mediterranean has been a common route for migrants and has become known as “the grave of the Mediterranean sea,” due to the large number of people who have died attempting to make the journey. Many come from Iraq, Eritrea, Somalia and other war-torn and poverty-stricken countries.

“The world and Canada cannot shun their responsibilities towards those who are suffering and living unspeakable horrors in their own countries. It is a question of dignity and not only is there an urgency for aid, but there must be a real and concerted effort by world leaders to accept a greater number of refugees and to re-instate peace negotiations to end the war in Syria,” said Guy Des Aulniers, Coordinator of Humanitarian Aid at Development and Peace.

Development and Peace has a large-scale program supporting Syrian refugees in Lebanon, Turkey and Jordan, which together are hosting over 3.5 million refugees. In light of the deterioration of the crisis in Syria, it also launched a petition to call on the Canadian government to increase aid and to act for peace in Syria and throughout the region.

Canadians can contribute to Development and Peace’s relief efforts for the European refugee crisis or for the Syria crisis by calling 1 888 234-8533, making an online donation at www.devp.org or sending a cheque made out to Development and Peace to 1425 René-Lévesque Blvd. W., 3rd Floor, Montreal, QC, H3G 1T7. Please indicate on your chequeEuropean Refugee Crisis or Syria Crisis.