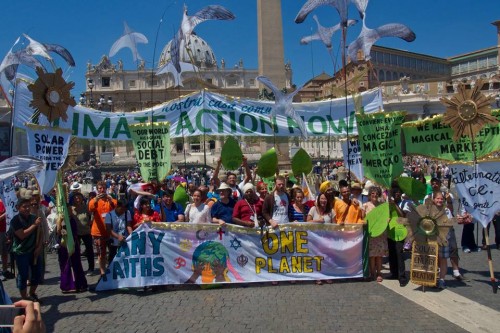 Civil society leaders speaking at an Our Voices press conference in Rome on July 3, in which Development and Peace  participated, positively assessed the impact of the Pope´s Encyclical, “Laudato Si´, Care for our Common Home”  issued at the Vatican on June 18.

Coordinator of Our Voices, the interfaith global movement for climate action, and Executive Director of GreenFaith, the US-based think tank for religion and ecology, Fr. Fletcher stated that “one recent example was the recent Multi-Faith Emerging Leaders Convergence in Rome (June29 to July 1) organized by Our Voices to train 100 young faith leaders from 40 countries and all major faith traditions in advocacy and outreach on climate change issues, with strong emphasis on the Encyclical. The preceding large and widely reported interfaith climate change march on 28 June to St. Peter´s Square involved a broad representation of faith and civil society movements, earning a much appreciated public welcome from the Pope at the end of his Angelus message.”

“Fighting climate change is fighting poverty and injustice. All of us share the Encyclical´s impatience at the lack of progress in the UN climate negotiations. Decisive action is needed now; we urge world leaders not to miss the opportunity at the next negotiations in Paris in December. The growth of the climate movement in the faith community, and more broadly, has provided the kind of political cover that world leaders need in order to act.”

Josianne Gauthier, Director of the In-Canada Programs at Development and Peace said that “as the Encyclical makes clear, fighting climate change and poverty must go together. Our member organizations will be promoting it in their countries, and running a massive campaign, Create a climate of change. We in Canada will be campaigning this autumn to educate the government of Canada. CIDSE calls on everyone to effect a personal transformation and change of lifestyle. If the public demands something of government that is in line with its personal choices, then surely politicians cannot ignore the popular will. We are hopeful that change is possible, and happening; we have to hold onto the idea of humans being capable of doing good.”

“The CIDSE network of 17 Catholic development NGOs, to which my organization belongs, in partnership with the Holy See´s Pontifical Council on Justice and Peace, organized a broad gathering of diverse Catholic and non-Catholic representatives, as well as scientists, from July 2 to July 3 in Rome, to celebrate the launch of the Encyclical. We see this document as a real call to action and prayer, especially for Catholics.”

“The Encyclical represents the most visible expression of the widespread increase in religious engagement of every major faith tradition around the climate crisis,” stated the Rev. Fletcher Harper, priest of the US Episcopal (Anglican) church.

According to Wael Hmaidan, Director of the 900-NGO Climate Action Network International, the Encyclical sets high standards for global political action. “Whatever comes out of the upcoming high-level global meetings, such as the new Sustainable Development Agenda at the UN General Assembly in September and the climate negotiations in Paris in December, will be compared to the visionary nature of the Encyclical. This document makes clear what needs to happen to address climate change, which is to gradually and without delay replace fossil fuels with sustainable solutions, especially renewable energies. Will the international political community be brave enough to commit to this vision?”

Speaking for the Italian Climate Network, Dr. Federico Brocchieri, Coordinator of ICN’s youth section, said that the Encyclical would have “a very important role in increasing awareness worldwide, particularly in Italy. It may not have a direct impact on the UN negotiations, although it could help us measure to what extent the action taken by governments in Paris will be in line with the targets set by science. Our organization undertakes a broad range of activities both to inform the Italian public and to influence the outcome of the climate negotiations, participating in a recent major  push by youth organizations for the concept of intergenerational equity to be included in the current negotiating text for Paris.”

Isaiah Toroitich, Global Policy and Advocacy Co-ordinator of Action by Churches Together International (a coalition of 147 non-Catholic Christian NGOs active in over 140 nations) said that his alliance was focusing on advocacy activities relating to climate finance, adaptation, loss and damage, and low carbon development. “We immediately welcomed the Encyclical in a press statement. We feel it gives us an additional moral and ethical imperative that supports our calls for equity and climate justice.”

“The document addresses the world community; it is an inspiration to all civil society to boldly ask for higher ambition from governments. The Holy Father called out powerful governments and businesses that seem to have been concealing the problem to show an honest and genuine commitment to address the issues.”

“We will continue referring to the Encyclical in our work, particularly in Africa at the forthcoming launch next month of the two-month Mozambique–to-Kenya bicycle pilgrimage involving many thousands of young people, supported by our climate change ambassador, the Archbishop of the Anglican Church of Southern Africa, the Most. Rev. Thabo Magkoba.”

The former senior climate change negotiator and climate commissioner of the Philippines, Yeb Saño, who now leads the Our Voices People´s Pilgrimage for Climate Action, culminating in his heading a 1500 km/ 26-person walk from Rome to Paris starting on 30 September, envisions this activity “as a special journey bringing a rich tapestry of spiritual traditions from all over the world. The Pilgrimage pays homage to every community that stands up against climate change and shows resilience.”

“Together we will have totalled 40,000 kms, or the equivalent of the world´s circumference; the Encyclical also has 40,000 words. As we reach Paris, we will be joined by pilgrims from all over Europe while other pilgrimages will be happening across the world. Of course, it will no doubt take much more than our pilgrimage and civil society mobilizations to improve the outcome of the Paris negotiations compared to current expectations – we need a spiritual and ecological conversion on a planetary scale.”