Development and Peace receives $2.4 million from the Canadian government to aid displaced Iraqis 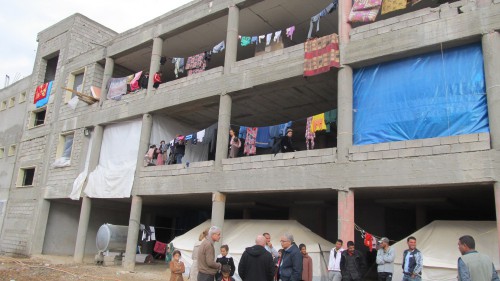 Development and Peace has received an additional $2.4 million from the Department of Foreign Affairs, Trade and Development (DFATD) Canada to continue its humanitarian response in Northern Iraq, where there are currently over 500,000 people who have been displaced from their homes due to violent conflict.

The project, which began in September 2014, received an initial funding of $1 million from DFADT, and is aimed at ensuring that those who have been displaced can meet their essential needs and maintain their dignity in these challenging and tragic conditions. The project is being carried out in the province of Dohuk, which runs along the border of Turkey, and where many Iraqis, mostly those from Mosul, have taken refuge after their villages were attacked by ISIS (Islamic State of Iraq and the Levant) militants.

The situation for those displaced has become all the more precarious due to the arrival of winter. As most people have lost all their belongings, they have little to provide shelter from winter temperatures, which can drop to below freezing in this region of Iraq. The region has also been hit with heavy snowfalls that have increased the suffering of the population.

With this funding, Development and Peace will work locally with Caritas Iraq and Catholic Relief Services to bring aid to 10,500 individuals. Shelters will be upgraded to help fight the cold, and winterization kits that include heaters will be distributed. In addition, hygiene facilities will be improved, water supplies extended and six child-friendly spaces will be created to allow 1,440 children to partake in recreational, educational and psychosocial support activities.

“The extension of this project will allow families to survive through the winter. They fled their homes in fear of death and persecution, and we want to ensure their wellbeing, particularly over the next few months when their circumstance risk to deteriorate substantially,” says Guy Des Aulniers, Emergency Program Officer at Development and Peace.