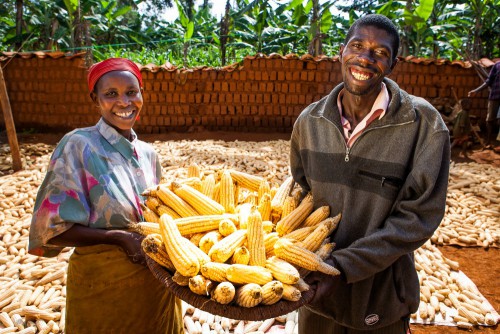 To mark World Food Day, on October 16th, a new survey will be released that reveals that the majority of Canadians are concerned about world hunger and are willing to take action against it.

The survey, which was conducted by Ipsos and sponsored by the international development organizations Development and Peace and the Canadian Foodgrains Bank, polled a random sample of 1,002 Canadians 18 years and older on their perceptions of world hunger.

Most said that they would be willing to personally do these actions to help in the cause to end world hunger. They also ranked international development and relief agencies as the most trusted actors in the fight against hunger.

“It is inspiring to see that Canadians are willing to do their part in the struggle against world hunger. Our collective actions can make a huge difference,” says Josianne Gauthier, Director of In-Canada Programs at Development and Peace.

Canadians view poverty as the main cause of world hunger, followed by government corruption and conflict to form the top 3. Canadians, however, underestimated the extent of hunger in the world, with 42% placing the number of people living in hunger below 500 million, and another 26% admitting to not knowing. The United Nations World Food Program estimates that there are currently 805 million people, or 1 in 9, who suffer from hunger.

The majority of respondents agreed that Canada as a wealthy nation has a responsibility in providing aid in the fight against world hunger, either through technical assistance to countries in the Global South, ensuring access to seeds, or by providing financial aid, amongst others.

Development and Peace works with grassroots organizations in Africa, Asia, Latin America and the Middle East whose projects are aimed at eradicating poverty and addressing issues of injustice faced by groups that are marginalized, such as women and indigenous communities. Through its international development programs, it is supporting small family farmers in improving their agricultural practices and in challenging policies that place them at a disadvantage.

The organization is currently running a campaign called “Sow Much Love” that draws attention to the challenges faced by small family farmers in developing countries, including diminishing access to seeds. As part of the campaign, Canadians across the country are signing a petition to ask that Canadian policies and programs support small family farmers, and protect their right to preserve, use, and exchange seeds.