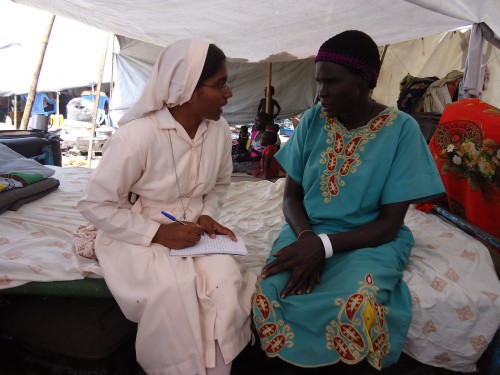 As the political and humanitarian crisis in South Sudan continues to deteriorate, and millions face hunger in the coming months, Development and Peace is increasing its relief efforts in the country.

Working with the Daughters of Mary Immaculate (DMI) religious community, Development and Peace is providing aid in two United Nations camps in the capital Juba for those who have been displaced due to conflict in the country.

There are currently one in seven people, or 1.3 million, in South Sudan who have fled their homes due to fighting between factions of the president and those of the former vice-president, both of different tribes, which has led to ethnic tensions and attacks in several parts of the country.

The brutal fighting, which began in December 2013, has not spared civilians and has left 3.8 million people in need of assistance. The conflict has prevented the planting of crops, which has created a lack of food for millions, and the United Nations recently declared the food crisis in the country as the “worst in the world.”

With the DMI sisters, Development and Peace is helping to meet some of the urgent needs faced by the most vulnerable in the camps, including health and nutrition services. The welfare of children is of particular concern, and highly nutritious foods to prevent and curb malnutrition are being supplied. In addition, the DMI sisters are organizing pre-school and primary school classes, as well as other educational activities for children.

Another important activity taking place in the camps is the establishment of Peace and Reconciliation Committees to help those in the camps to eventually re-integrate harmoniously into their communities.

“This is a young country that has rarely known peace in its history, and efforts need to be made so that the people of this country can experience stability and security, and begin to rebuild their lives,” says Dominique Godbout, Emergency Programs Officer at Development and Peace.