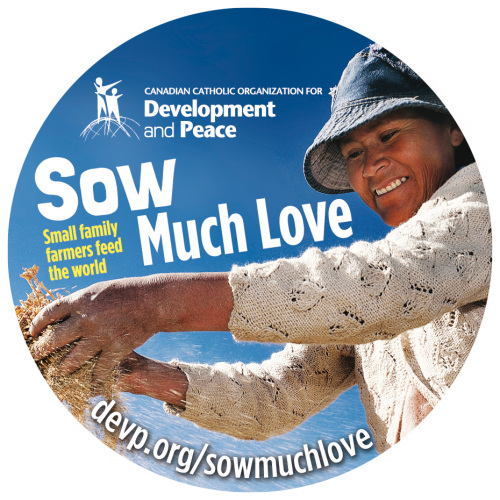 Development and Peace has launched a new campaign to raise awareness on the crucial role of small family farmers in the Global South in feeding the world, and the growing threat to their right to save, exchange and use their seeds.

Under the slogan, Sow Much Love, the campaign encourages Canadians to take action to support small family farmers in defending their rights in the face of the increasing privatization of seeds.

“If small family farmers in the Global South do not have access to seeds, it will only make it harder for them to feed their families and their communities. Seeds are life, and a common good that should not be controlled by private interests seeking profit,” says Josianne Gauthier, Director of In-Canada Programs at Development and Peace.

There are currently one in eight people in the world today who suffer from hunger. Small family farmers feed up to 80% of the population in the Global South, but this is becoming increasingly difficult due to a number of threats, including the loss of access to seeds. Development and Peace believes that this grave injustice must be addressed and that small family farmers, who are the stewards of the world’s seeds, must be supported in their struggle to maintain access to seeds.

As part of the campaign, Development and Peace is inviting Canadians to sign a petition asking the Government of Canada and the House of Commons to commit to respecting the rights of small family farmers to save, exchange and use their seeds. It is also encouraging consumers to buy local and organic produce, which supports the biodiversity of our food supply and the right of farmers around the world to use their seeds.

Throughout the fall, Development and Peace’s network of more than 10,000 members across the country will be bringing the campaign to their communities by organizing a variety of activities, including workshops, seed exchanges and the distribution of information resources.

The campaign will culminate in October during a week of action that will coincide with World Food Day on October 16th, 2014. Throughout that week, which is part of Caritas Internationalis’ global campaign to end world hunger, a nationwide mobilization will take place, which will include a photo contest of Thanksgiving meals made with local foods, the signing of petitions and other activities.