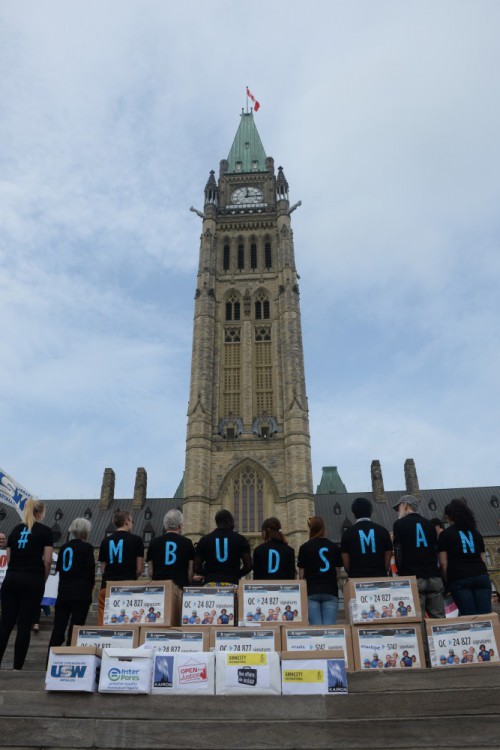 On May 14th, Canadians gathered in large numbers on Parliament Hill to call for the creation of an impartial and independent ombudsman for responsible mining. With over 85,000 signatures collected in favour of this call, Development and Peace is hoping the government will take urgent action on this issue.

A crowd of nearly 300 people from all parts of Canada gathered on the steps of Parliament Hill in a festive yet determined spirit. Together, they called on the Canadian government to take urgent action regarding the irresponsible behaviour of certain Canadian mining companies operating overseas.

Since the launch of the campaign in September, over 85,000 people have shown their support for the campaign by signing petitions and action cards addressed to MPs encouraging them to act for an ombudsman.

“We have to stay mobilized so that millions of victims in Africa, Asia and South America will no longer have to experience the violation of their rights or the pollution of their environment,” said Josianne Gauthier, Director of In-Canada Programs at Development and Peace.

Throughout the day, several members of Development and Peace also met with MPs to present them with signed cards from their constituents and to further raise awareness with them of the distressing situation of these communities in the Global South.

After ten years of mobilizing, Development and Peace – Caritas Canada celebrates the creation of an ombudsperson for mining and other sectors
Read more