Development and Peace completes its Haiti housing project in Ti-Boucan 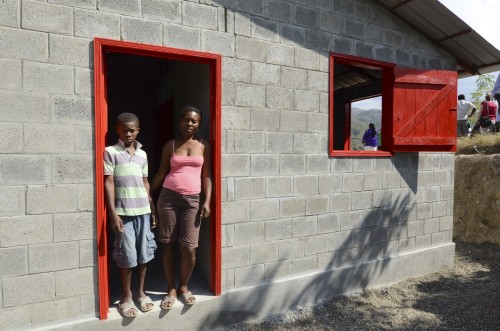 More than four years after the violent earthquake that struck Haiti and left an indelible mark on the collective memory of all Haitians, Development and Peace hosted an event in Haiti today to celebrate the completion of its housing reconstruction project in Ti-Boucan (Gressier).

The event, which was held at the training centre of the Institute of Technology and Animation (ITECA) in the presence of representatives of the Government of Haiti, Canadian officials, various community stakeholders, partner organizations and the media, marked the end of this project which saw the construction of permanent houses for 400 extremely vulnerable families who lost their homes in the quake.

Over the last two years, Development and Peace and its partner organization ITECA, have been leading this project, which is one of the most important housing reconstruction initiatives to be carried out in a rural community in post-earthquake Haiti. This $6.5 million project was jointly funded by Development and Peace and the Department of Foreign Affairs, Trade and Development Canada (formerly the Canadian International Development Agency), and implemented by ITECA, which has been involved in the Gressier community for over 25 years. The project represents a real alternative model for post-earthquake reconstruction based on “rebuilding a human habitat” rather than the mere reconstruction of four walls.

The project also introduced a new housing model in Haiti, that of a para-seismic and para-cyclonic home that is built through innovative interlocking-block technology that facilitates rapid, reliable, low-cost construction. Four years after the earthquake, housing construction remains an obvious priority in Haiti. “The completion of the project sends a message of hope for thousands of homeless people who are living in very precarious conditions,” says Michael Casey, Executive Director of Development and Peace.

As well as providing new housing for 400 peasant families, the project also created 600 direct jobs, especially for specialized workers and trades people on the various construction sites. With 50 sites on the go practically around the clock over the last two years, the project also generated 100 or so indirect jobs. The 400 recipient families and the residents of Ti-Boucan were not just simple beneficiaries of the project. They were active participants and workers who helped build 400 homes from the bottom up, and brought the community together.

Development and Peace has been active in Haiti for some 47 years and in conjunction with its partners is continuing with its reconstruction program, which is focusing on food sovereignty and security, the strengthening of justice, human rights and the democratic process, and skills development of civil society organizations.