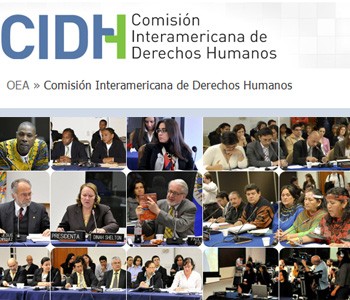 This Friday, November 1st,  Development and Peace will participate in a public hearing on the “Human Rights of People Affected by Mining in the Americas and Mining Companies’ Host and Home States’ Responsibility” during the 149th Session of the Inter-American Commission on Human Rights (IACHR) in Washington D.C. Two partner organizations will also join Development and Peace: CEHPRODEC (Honduras) and Pastoral Social de Dignidad Humana (Peru).

At this hearing, participating organizations will address the impact of mining activities on human rights and will highlight the role played by the home states of transnational mining companies in protecting human rights in the region’s mining industry. They will use the cases of Brazil and Canada as examples (80 percent of mining activity in Latin America is developed by Canadian companies). They will also discuss how the general practices of mining companies in Latin America impact the integrity of human rights in the region.

“The time has come to take a closer look at the problem of governance which enables irresponsible mining companies to increase their profits while taking advantage of an absence of regulation in certain countries of the Global South,” argues Michael Casey, Executive Director of Development and Peace. Casey then adds, “if a mining company chooses to set up in a country knowing that the nation has neither the will nor the resources required to effectively regulate its mining activities, we have to ask some hard questions concerning this company. It’s high time that countries of origin, Canada in particular, assume their share of responsibility in this respect.”

While the impact of extractive industries on human rights has been a topic of concern for the IACHR, this will be its first time addressing home state responsibility for the activities of mining companies and the human rights violations they have committed in a number of countries around the region. This lack of concern is even worse if we take into account that home states are aware of these violations, because they have been denounced directly before their embassies and, in some cases, before state entities in their respective countries. In many instances, these situations are widely known. And yet, in the case of Canada, for example, such violations of human rights have not led the state to demand compliance with human rights standards from their companies before granting them financial and political support.

Another reason is that the victims of such violations—who usually do not receive any kind of remedy in their own countries—do not find the appropriate mechanisms through which to channel their complaints and claims in the companies’ home states. In the case of Canada, neither civilian nor criminal courts provide mechanisms to respond to victims’ claims. Some state actions, such as holding multi-sector consultations, roundtables, or the establishment in 2009 of the Office of the Extractive Sector Corporate Social Responsibility (CSR) Counsellor, have proven to be insufficient. This situation has, in particular, led Development and Peace, through its A Voice for Justice campaign, to ask the Canadian government to create the legal mechanism of an effective and independent ombudsman for the extractive sector, empowered to respond to complaints from victims of this type of abuse, whether it has occurred in Latin America, Africa or Asia.

Finally, one other aspect that will be mentioned in the hearing is the intervention of Canadian government representatives in the drawing up and/or modification of national laws on mining and environmental matters in several of the countries under study. In this regard, Pedro Landa of CEHPRODEC, a partner of Development and Peace, will talk about the case of Honduras. This Canadian government intervention contrasts with the lack of participation of affected communities in the processes of reform and adoption of their own country’s mining laws, concessions and revocations.

For additional information or to arrange an interview with one of the participants, please contact
Khoudia Ndiaye, Communications Officer
514 772-9085
ndiaye.khoudia@devp.org

The Working Group on Mining in Latin America is composed of Latin American NGOs that have been working together since 2010 to develop common strategies to address the impact of mining on human rights in the region.

After ten years of mobilizing, Development and Peace – Caritas Canada celebrates the creation of an ombudsperson for mining and other sectors
Read more