An appeal for peace in Syria 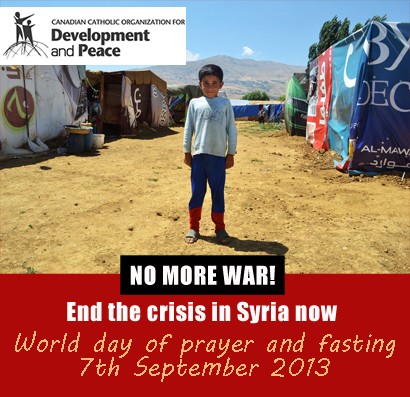 Development and Peace and Canadian Jesuits International invite all Canadians to join with Catholics the world over to pray and fast for peace in Syria on September 7th. Together, we echo the appeal of Pope Francis: “Let the cry for peace rise up across the Earth!”

As Catholic organizations in solidarity with the poorest people of the Earth, we cannot accept the fact that 100,000 people have already lost their lives in this conflict. We are deeply disturbed by the plight of millions of women, children and men in Syria, who continue to suffer daily from this conflict that has continued to worsen over the last two years.

We are very concerned for the welfare of the two million refugees in Lebanon, Turkey, Jordan, Iraq and the many other places where they have taken refuge, as well as their host communities, and by the potential security consequences for the region if a military intervention were to take place. The conflict in Syria has unleashed a large-scale humanitarian crisis, and women, children, the displaced, refugees, and all those most vulnerable are paying the highest price.

We condemn all acts of violence, particularly the use of chemical weapons, and are shocked and distressed by such serious attacks on human dignity. We do not believe that military strikes can or will provide a solution, for history has clearly shown - as Pope Francis reminds us in his Angelus message of September 1st – that “Never has the use of violence brought peace in its wake. War begets war; violence begets violence.” A military intervention will only cause greater suffering for the millions of people already affected.

This war must end. All parties involved, nationally and internationally, must not consider a military intervention, but must use all their power, creativity, and resources to find a political solution to the crisis and work towards building lasting peace. We appeal to them to affirm their belief in peace, in their own humanity, and in the humanity of their neighbors, regardless of religious affiliation or ethnicity.

Pope Francis extends an invitation “to the entire Catholic Church, and also to every Christian of other confessions, as well as to followers of every religion and to those brothers and sisters who do not believe: peace is a good which overcomes every barrier, because it belongs all of humanity!”

Here are several prayers that you may use on September 7th.

Development and Peace (www.devp.org) and Canadian Jesuits International (www.canadianjesuitsinternational.ca) are Canadian Catholic organizations working in solidarity with the victims of the Syrian conflict through humanitarian relief programs in the region.