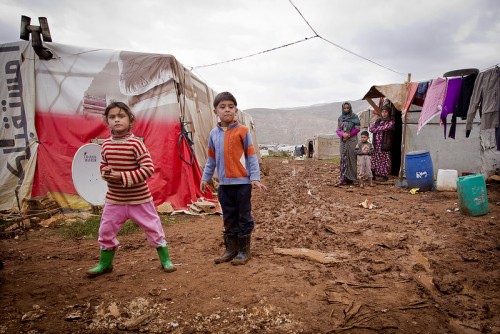 The ongoing civil war in Syria has created an acute humanitarian crisis for the population. Many civilians have fled to neighbouring countries to escape the violence and are now living in refugee camps or trying to get by with little or no resources at their disposal. For those remaining in the country, they face the complete deterioration of their living conditions as electricity, water and gas are in short supply, and food is becoming increasingly scarce. The onset of winter has added to the suffering of all those affected.

Development and Peace is supporting local Caritas’ and other organizations in the region in responding to the humanitarian needs of the Syrian population.

“The civil war in Syria has lasted longer than anyone expected, which has aggravated the situation tremendously. Most Syrians were not prepared for the long duration of this crisis and needs are growing by the day, in and outside of the country,” says Guy Des Aulniers, Emergency Relief Programs Officer. “For countries receiving refugees, more people are arriving daily, and tensions are mounting in communities as they try to adjust to the pressure of sharing space and resources.”

There are now 650,000 Syrian refugees residing in nearby countries, either in camps, with host families or on their own. Turkey, Jordan and Lebanon have absorbed the largest numbers of refugees and are struggling to meet all the urgent needs. Development and Peace is contributing towards programs with the Caritas’ in all three countries to bring basic needs to refugees in and outside of camps, and to host families, such as medical assistance, food coupons, blankets, heaters, other winter items, and psychosocial services.

Aid is being particularly directed towards those who are most vulnerable, such as women who are alone with their children, those with disabilities and those with a chronic illness. In total, these programs will bring assistance to close to 60,000 individuals.

In Syria itself, there are an estimated two million people who have been displaced, and four million in need of humanitarian assistance. Development and Peace is contributing towards the distribution of food baskets and medical supplies in Aleppo, one of the hardest hit cities, and is helping 1,600 vulnerable families across the country become equipped for winter conditions. In addition, it is supporting a community bakery that will employ families that have sustained heavy casualties during this crisis and which will provide bread for 40 villages in the province of Idlib.

Development and Peace is currently accepting donations towards these relief efforts. Donations can be made by phone (1 888 234-8533), online at www.devp.org/donate/syria or by sending a cheque made out to Development and Peace (please indicate Syria Crisis) to the following address: