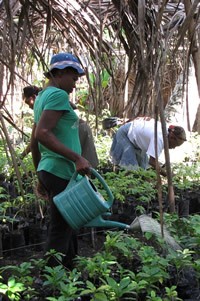 Haiti is commemorating the third anniversary of the devastating earthquake that wreaked havoc on the island on January 12, 2010. Already present in Haiti before the disaster, Development and Peace participated in immediate emergency relief actions and today continues to support reconstruction and development projects. The organization's actions are mainly focused on food sovereignty and security, promoting human rights and, finally, the construction of houses, and social and community infrastructure.

Three years after the earthquake, Development and Peace and its partners are still as mobilized as ever and are focusing their efforts on the most vulnerable sectors of society. "Today is an opportunity for us to once again pay tribute to the victims of that terrible earthquake and to reiterate our deep and lasting commitment at the side of the most vulnerable. The work is far from finished but we are working together, hand in hand with our partners, for Haiti's reconstruction," said Michael Casey, Executive Director of Development and Peace.

Since 2010, around 10,000 peasant families have benefited from the project at varying degrees, including  access to “Pre-Kay” gardens, and have received resources, seeds and training sessions on farming techniques. Several others have also gained access to wells and water tanks. This support for the development of environmentally responsible agriculture is enhancing food security for thousands of families.

Development and Peace is also continuing its action to defend and protect human rights in the broader context of reconstruction. In particular, tools have been developed to prevent violence and empower victims of violence, and training sessions have been offered to professionals who are providing care and support to women and girls who have been victims of violence.

Since 2010, several construction projects have been put in place, and in some cases completed, including that of schools, homes, community halls and training centres. A house-building project has also been launched in Gressier, on the outskirts of Port-au-Prince. "The challenges [of this project] have been many and the start-up took longer than expected, chiefly for technical reasons. However, on January 31, the first 50 families will receive the keys to their homes and we should have another 400 ready by this summer," said Jean-Claude Jean, office manager for Development and Peace in Haiti, before adding that, "This project is a great source of pride because it is developing local skills, promoting jobs for the population and favouring the use of the country's resources."

In response to the earthquake, Canadians sent $20 million to Development and Peace. In addition, the organization received about $7 million from CIDA. To date, $20 million has been committed towards projects.