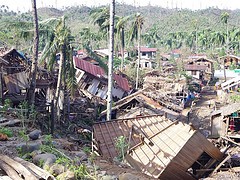 Typhoon Bopha (known locally as "Pablo") passed to the south of the large islands of the Palau archipelago on December 3, on its way to the Philippines, with winds recorded at over 250 km per hour. The human toll has been catastrophic and continues to rise with every passing day. The number of dead has risen to 500 people and 400 others are still missing. In total, more than 5 million people have been affected by the situation, prompting the President of the Philippines, Benigno Aquino, to declare a state of emergency.

Development and Peace is present in the Philippines and is assessing the scope of the damages and the needs of the most vulnerable in collaboration with its partners, including NASSA-Caritas Philippines. Teams have mobilized in the affected areas, mainly in the provinces of Compostela Valley, Davao del Norte, Davao Oriental, Bukidnon, Cagayan de Oro, Iligan, Agusan del Sur and Surigao del Sur.

In the immediate term, there is an urgent need to distribute food, shelter, and medicine to the stricken population. Thousands of people have fled their homes and are in need of basic necessities. Water scarcity is also a major problem. Heavy rains have caused rivers to overflow, resulting in flooding and landslides. There is also fear of water contamination.

Development and Peace is accepting donations that will be earmarked for our emergency program in the Philippines. Donations can be made: