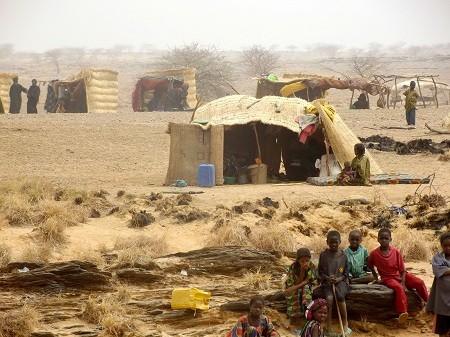 The Canadian Conference of Catholic Bishops (CCCB) and Development and Peace have announced a joint campaign to respond to the serious food shortage and drought in the Sahel region of West Africa. Pope Benedict XVI earlier this year had appealed to the international community because of the situation. Caritas Internationalis and national Caritas organizations, among them Development and Peace, have already begun responding to emergency needs in the Sahel and mobilizing to prevent a major humanitarian disaster there.

Development and Peace, in partnership with Caritas Internationalis and its emergency programs, is helping local Western African community groups cope with the effects of the food crisis, which threatens to worsen over the summer. Together with the Canadian Foodgrains Bank, Development and Peace is supporting large-scale food distribution projects organized by Caritas Mali, Caritas Niger and Caritas Burkina Faso.

Caritas Internationalis reports some 15 million people face food shortages and malnutrition in the Sahel. “According to forecasts, the crisis will be acute until September 2012 in Burkina Faso, the Gambia, Mali, Mauritania, Niger, Senegal, Chad, northern Nigeria and northern Cameroon,” the report states. “The food crisis is caused by low rainfall followed by droughts, which has led to poor harvests as well as higher prices for food items in the region.” Caritas Internationalis says the food shortage is also impacted by the return of migrants from Libya and Côte d’Ivoire, and the effects of an earlier food crisis in 2010. More than a million children are estimated at risk of acute malnutrition in the region.

The West Africa Emergency page on the Development and Peace website provides background information about the underlying causes of the crisis in the Sahel. A power point presentation for schools and parish youth groups is also available. In addition to appeals which will be made by local dioceses and parishes across Canada, donations can also be made on line to Development and Peace at www.devp.org/donate.

To read the CCCB press release: Canadian Conference of Catholic Bishops - Emergency appeal for the Sahel region of West Africa