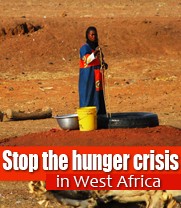 Development and Peace is warning that a growing food crisis in West Africa will continue to worsen if the international community does not mobilize to react to this unfolding humanitarian crisis. An appeal has been launched to support relief efforts in the region.

An estimated 15 million people are facing the threat of increasingly dire food shortages in the coming months due to poor rains, which have had a detrimental effect on crops. This is part
of a pattern of recurrent droughts in the region which has made it difficult for communities who rely on subsistence farming to cope. Rapidly rising food costs have made the purchase of food inaccessible for many.

In addition, the armed conflict in Mali has de-stabilized the region by displacing over 220,000 Malians, many of whom have taken refuge in neighbouring countries, which are also affected by this crisis.

Mali, Niger, Burkina Faso, Chad and Mauritania have declared states of emergency and have asked for international aid. Senegal, Gambia and parts of northern Nigeria and northern Cameroon are also affected.

Development and Peace is currently supporting local partner organizations in Mali, Niger and Burkina Faso with the distribution of food staples and other activities to help communities cope with food shortages and malnutrition.

“There is so much more we can do,” says Michael Casey, Executive Director of Development and Peace. “This crisis has the potential to spiral into a major humanitarian catastrophe if we don’t act now.”