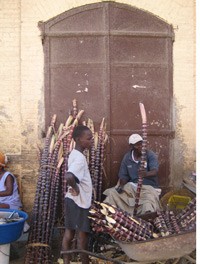 The President and Vice-President of the Canadian Conference of Catholic Bishops (CCCB) will be in Haiti from December 14th to the 21st, 2011.

Most Reverend Richard Smith, Archbishop of Edmonton, and Most Reverend Paul-André Durocher, Archbishop of Gatineau, will be visiting emergency and reconstruction projects supported by Canadians through Development and Peace, and put in place in response to the earthquake of January 12th, 2010. Bede Hubbard, Assistant General Secretary of the CCCB, will also be part of this delegation.

Michael Casey, Executive Director of Development and Peace, will be accompanying the group.

"We want to show firsthand the progress of the reconstruction programs in this country," says Normand Comte, Programs Officer for Development and Peace’s Haiti program, who is coordinating the visit.

The delegation will be visiting the capital Port-au-Prince, Jacmel and Hinche, where they will be meeting with peasant and women’s organizations.

In the days and months following the earthquake, Development and Peace raised $20 million from the Canadian population. Parishes across the country contributed to special collections in an outburst of generosity, as part of this campaign.

Food and shelter were quickly provided in the capital and other regions affected by the earthquake. The emergency program lasted nearly a year and was led in partnership with Caritas Haiti, religious communities and civil society organizations.

Since November 2010, Development and Peace has been supporting reconstruction programs that include the construction of houses and community infrastructure, support to peasant families and defending the rights of the poor.

"In the long-term, we want to improve the quality of life within communities and for people, for life to be more dignified," adds Normand Comte.