Development and Peace reaches $20 million for aid in Haiti 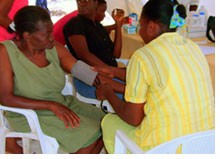 When a massive earthquake struck Port-au-Prince and its surrounding areas on January 12th, Development and Peace immediately launched an appeal to the Canadian public, who responded with a tremendous outpouring of generosity. The organization has now received over $20 million in donations from Canadians across the country.

“We never expected to collect so much but this disaster has really touched people. We will be able to fund very important projects that will help communities rebuild themselves and give Haitians hope for a new beginning,” says Jasmine Fortin, Director of Advancement at Development and Peace.

The organization expects to be present in Haiti for at least five years. It has already disbursed $2.5 million for emergency aid, such as the distribution of blankets, food kits, tents, water containers and the construction of latrines. It is also supporting programs to help displaced children return to school, mobile health clinics that visit camps, security patrols for the protection of women and children in the camps and the distribution of seeds in rural areas to fend off the threat of a food crisis.

As the Canadian member of Caritas Internationalis, Development and Peace has participated in a large emergency operation led by Caritas Haiti and Catholic Relief Services that reached an estimated 200,000 people in and around Port-au-Prince.

It also just committed $6 million towards a post-emergency program that will focus on food security, the re-launch of economic activities and initial efforts to rebuild houses.