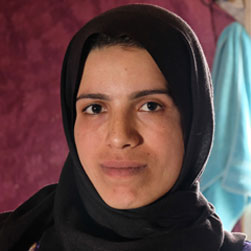 “The city near where we lived was divided between the regime and the Free Syrian Army. We had to go through military checkpoints. Daily life was becoming harder and harder, so we decided to leave it all.

Our village is now a military zone and we can’t go back. Just yesterday, someone told us that a person from our village was slain. How can we even think of going back in these conditions?

What I miss the most about Syria is my house, my homeland, my mother and my father. I haven’t seen them in five years.”

Aysha is a Syrian refugee in Lebanon. She has been there since 2012 and lives in a makeshift camp with her four children. Her husband is now in Germany and she is waiting to hear if she will be able to join him.

The largest refugee crisis in the world

For most Syrians, all they have left of their homeland are but mere memories of the sights and smells of the land, the marketplaces and the familiar faces that made it home. Since the start of the civil war in Syria in 2011, air strikes, fighting and mortar shells have wiped out entire neighbourhoods and communities, forcing 12.5 million Syrians to flee.

The work of Caritas Liban

With the war dragging on, there are fewer and fewer services for refugees, but with support from the Canadian government, Development and Peace continues to work with its partner Caritas Lebanon, in providing physical and mental health aid to 41,685 Syrian and Iraqi refugees, as well as vulnerable Lebanese.

“Women who participate in the discussion groups we organize are able to express their frustrations, share their problems, and make friendships. They have also told us that it helps them to cope with their stress and their emotions and to learn to be more assertive,” says Carla Nammar, Project Manager at Caritas Lebanon.