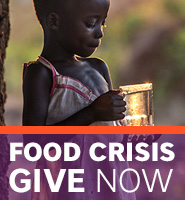 70%
of the population of Yemen is in need of assistance and protection to meet their basic needs.

1.4 million
children are projected to be acutely malnourished in Somalia this year.