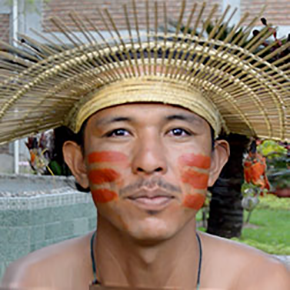 We take from the forest only what is necessary for our survival. In my opinion, there is no one who can take care of the forest better than Indigenous people can.
— Jeremias Oliveira, Mura representative.

The Mura Indigenous people, who subsist as hunters, fishers and gatherers, have a proud history of resisting colonialism. They live in 38 villages around Manaus, the capital of Brazil’s Amazonas State.

A mine of misery

The Muras’ lands, livelihoods and lifestyle are threatened by a large potash mine that is being built by Potássio do Brasil, a resource company that has financing from a Toronto-based investment fund. The project will result in:

Contrary to its claims, the mining company has not meaningfully consulted the Mura, resorting instead to obfuscation, misrepresentations and bribery. Those among the Mura people who refuse to be coopted and dare to resist are criminalized and persecuted.

Exploratory drilling for the mine began in 2010 and permits were granted in 2015. By 2017, the company had invested $180 million of a planned outlay of $2 billion. Recently, the Mura won an interim injunction against the mine on the grounds of insufficient consultation. But this is unlikely to last because the mine is backed by powerful vested interests.

Our partner, Rede Eclesial Pan-Amazônica (REPAM, the Pan-Amazonian Ecclesial Network) is a church network supported by the Latin American Bishops’ Conference. In the nine countries of the Amazon, it promotes human rights, helps marginalized communities resist injustice and draws global attention to the deteriorating condition of the Amazon and its Indigenous peoples.

How CIMI is helping

Another of our partners, Conselho Indigenista Missionário (CIMI, the Indigenous Missionary Council) was established by the National Conference of Bishops of Brazil. Its 400+ missionaries support Indigenous peoples’ struggles for autonomy, territorial rights and social justice by helping them organize, litigate, advocate and publicize their causes more effectively.

Together, let’s take action FOR OUR COMMON HOME!