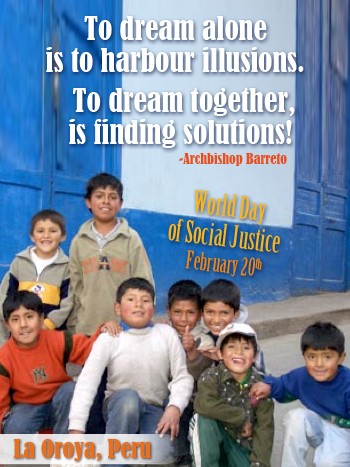 “Actions for Solidarity: The Time is Now ! To dream alone is to harbour illusions. To dream together, is finding solutions.”
- Most Rev. Pedro Ricardo Barreto, Archbishop of Huancayo (Peru), President of the Justice and Solidarity department of the Latin American Bishops’ Council (CELAM), and a member of the Pontifical Council of Justice and Peace at the Vatican.

It is appropriate that this year World Day of Social Justice falls during our Share Lent campaign - a moment where we celebrate our commitment and solidarity towards building a just world. Social justice touches on questions of rights, human dignity and solidarity. It is also deeply connected to questions of ecological justice and respect of natural resources with regards to their management, conservation and justice.

Archbishop Pedro Ricardo Barreto recently travelled from his diocese in Huancayo Peru to Canada to share the story of the community of La Oroya, where people have been facing the unjust poisonous effects of a nearby smelter. Archbishop Barreto spoke to hundreds of Canadians in Edmonton, Hamilton, Toronto and Montreal about how the people in La Oroya were living in an environment where nothing could thrive, including the people, due to the amount of pollution being filtered into the air and contaminating local water sources, the vegetation, and the people themselves. In fact, Time magazine went so far as to call La Oroya one of the ten most polluted places on the planet.

When Archbishop Barreto arrived in the diocese in 2004, he quickly realized that if the environment is suffering, then so are the people. The severity of this injustice became all too real for him when he travelled to the United States, and saw a smelter run by the same company as the one in La Oroya. Instead of large clouds of dark smoke exiting the smelter’s chimney into the atmosphere like the one in La Oroya , the chimney almost seemed dormant so clear was the exhaust coming out of it. Archbishop Barreto couldn’t help but ask why the smelter in La Oroya had such polluting emissions?  He began to call for an ecological conversion in his diocese, and through the Episcopal Commission on Social Action (CEAS), a Development and Peace partner organization, he helped to organize blood tests to measure toxicity levels and organized nutritional programs to ensure children could eat properly and rid themselves of the toxins inhabiting their still-growing bodies. Thankfully, the smelter closed in 2009, allowing the environment to regenerate and locals to begin to regain their health. Now in 2013, Archbishop Barreto reports that the landscape is beginning to transform into one where vegetation can grow again. And thanks to lobbying efforts, only part of the smelter has re-opened. For the other part to function, an investment of $120 million would need to be made to ensure that the smelter meets environmental standards established by the government.

Archbishop Barreto mentioned that the work that was done in La Oroya was thanks to the support of several different groups and people. He compared this solidarity to a puzzle, where everyone contributes a piece, all of which must be brought together to create social justice. At a time when it may feel like as an individual we can do very little, Archbishop Barreto reminded us that no matter how small our contribution when combined with that of others, it can make a world of difference – even a world of justice.

Check out our own Share Lent puzzle (in the form of Solidarity Cards) to see how your contributions are making a difference!