When there are no seeds left to plant 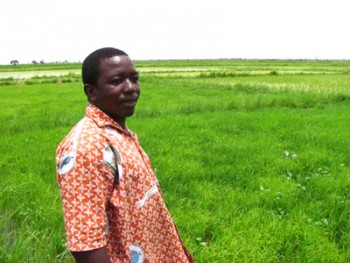 The Sikasso region in the South of Mali is dominated by the wide berth of the Niger River, making it favourable for the cultivation of rice. After a few days of rain here, the river is full and ready to irrigate the rectangular rice paddies nestled at its banks. But for rice to grow, there need to be seeds to plant. And this year, many farmers simply don’t have any because as a last resort to stave off hunger, they went through their reserves.

Fulgence Savadogo cultivates three hectares of rice with his three brothers. Their stocks from last year ran out in February. Fulgence was making some money by working in the kitchen of a religious community in the area. However, when a coup d’état took place in March, the sisters, like most foreigners, left Mali, due to the insecurity, leaving Fulgence unemployed and with no means to feed his family.

Although rice sells for more at the market and can be a more profitable crop than millet or maize, it also costs more to produce. Rice farmers often incur debts at the beginning of the season to cover certain costs, such as fertilizer and labour. They can usually pay off these debts and make enough to support their families - provided that there is a good harvest.

Despite the promising rains that are now coming, the season was looking grim for Fulgence and his brothers. They only had enough seeds to plant two hectares, and the loss of the third would mean reducing their ability to pay off their debts, or potentially even accumulate more. “If I wanted to plant the third hectare, I would have to buy the seeds on credit,” he says. Thanks to a seed distribution program organized by Caritas Mali, Fulgence and his brothers will not have to carry the burden of more debt. They received enough seeds to plant their last hectare, which is now a blanket of green from the stalks of the rice seeds.

Rice seeds, and others like millet, maize and sorghum, were distributed to 1,425 households across the country as part of this program, giving those, like Fulgence, the opportunity to hopefully get the most out of this coming harvest.