"We're finally going to be able to sleep like real babies, even when it rains!" 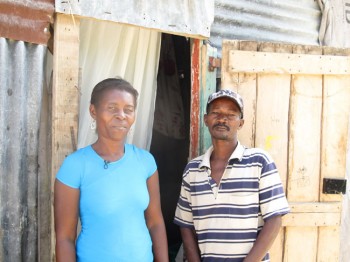 Micheline and her husband Jean-Philippe, AKA Frantzé, are going to live with their 12-year-old daughter and 14-year-old son in their brand new house. They will receive the keys to their new house next Tuesday at the project's official inauguration.

The earthquake of January 12, 2010, completely destroyed their house in Ti-Boucan, forcing the family to live for several days without a roof over their heads. They had to scramble to build a shelter on the site of their former home, by scrounging around here and there for pieces of sheet metal to build the structure and wooden planks for the door. There is no window, no water, no electricity, and the roof is full of holes, which poses many challenges for a family living from hand to mouth.

Everything is fine when it is not raining, but the situation quickly becomes difficult to manage when it rains. Since there are holes in the roof, the water leaks in from above, but it also comes up from the ground, systematically causing flooding. "It is especially annoying at night. The flooding forces us to get up and stay awake until morning," says Frantzé.

The family lives on very little means. Frantzé borrows money, sometimes at quite high interest rates, in order to purchase merchandise (chiefly tobacco), so that his wife can in turn go sell it at the markets in Gressier and other neighbouring communities. When their shelter is flooded, there is a high risk that the goods will be damaged, which means a considerable loss of income for the family.

"This house is going to get us out of the bad situation in which we have been living in for the last three years. Even if it rains, we will finally be able to sleep like real babies!" joked Frantzé.

As for Micheline, she finds the green colour of the newly painted house very pretty. But the most important thing for her is to live with dignity in their new home.