A village gets a boost 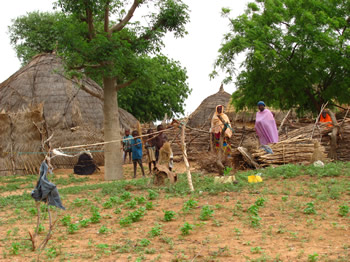 The village of Garbeygourou is found off an uneven dirt road that stretches over red sandy earth that has turned even brighter after a recent rainfall. The village itself only seems to be formed of a small cluster of huts, yet when we arrive and the village chief comes out to greet us, people begin to trickle out, slowly grouping in the middle of the village. Before we know it, there are at least 100 men, women, children and babies milling about behind us, with more arriving by the second. The village is receiving support from Caritas Niger because of food insecurity. Many families do not have enough to eat, and a there have been a few cases of severe malnutrition in some children.

The village chief, who has come out to greet us is wearing a huge smile across his face. "I must start by thanking you, because joy can't be hidden," he says in recognition of the solidarity of Canadians through Development and Peace. He is a young chief, however, and his eyes can't hide that he is concerned for his community. "We hope to have a harvest in 60 days, but we don't feel that there is enough food to last until the next harvest," he adds.

Caritas Niger has organized many activities here to help families cope with the food shortages, including seed fairs, cash-for-work projects, free food distributions and the sale of food at a reduced price. It has given the village a significant boost to last through these difficult days until the next harvest. For one elderly man, this has made all the difference. For the last two years, even at his advanced age, he has had to leave the village to try his hand at gold mining to support his family. But this year, he is thankful that he will not have to.  For now, with help from Caritas Niger, the village will avoid the feeling of ‘haray,’ the word that is used here to describe hunger, a feeling that has become all too common for many of the people of Niger.