Typhoon Haiyan: Our thoughts and prayers are with the people of the Philippines 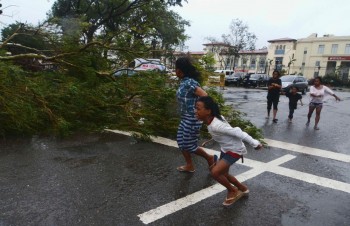 Just a mere few weeks after a violent earthquake struck the island of Bohol in the Philippines, the country is experiencing one of the worst typhoons in its history.

Typhoon Haiyan (known locally as Yolanda) has already struck several parts of the country, including Bohol and other regions that are still recovering from the previous 20 tropical storms that have come through the country this year.

Wind gusts as high as 380 km/h are battering down on communities with little infrastructure to withstand such devastating conditions. According to the country’s Department of Social Welfare and Development, 36 million people across 37 of the country’s 82 provinces are affected.

Millions have been evacuated in preparation, however, the extent of the damage remains to be seen, particularly as threats of mudslides and storm surges loom large.

Development and Peace is monitoring the situation closely and is trying to remain in contact with its partners in the country despite heavy damage to lines of communication. We are currently collecting donations in preparation for relief efforts.

Our thoughts and prayers are with all those affected by this storm and we are prepared to stand in solidarity with the people of the Philippines in the wake of yet another natural catastrophe.

To learn more about our support to the victims of the Bohol Earthquake, read our October 28th press release: Earthquake in the Philippines: Development and Peace supports the victims.