Two days of emotions in the Philippines 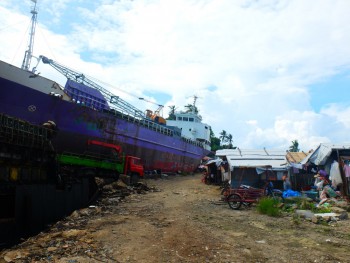 Arthur Peters is the Executive Director of ShareLife of the Archdiocese of Toronto. He is part of a delegation visiting Development and Peace projects in response to Typhoon Haiyan (Yolanda) in the Philippines.

Over the past few weeks, I’ve thought alot about the people who were on the Malaysian airliner that was shot down last month. The passengers were likely eating a meal, watching a movie, or speaking with one another, and in an instant it was all over.

Similar thoughts have come to my mind over the past few days as I have visited some of the areas that were hit by Typhoon Yolanda last November. Although there was warning, some people did not fully understand the strength of the storm surge. As the typhoon moved across the Philippines, winds as high as 340+ km / hour moved buildings and objects that seemed impossible to budge. People lost their lives, and for those that managed to survive, the will to live remains strong. In the face of a devastation that most of us cannot fathom, there is hope, and a determination not to be defeated by what has happened to them.

After arriving in Tacloban, we visited the Cathedral of Transfiguration of Our Lord of the Archdiocese of Palo. Archbishop John Du gave us a short tour of his parish, where the roof was torn off by the storm, and the altar was picked up and blown across the church. He showed us where he hid while the typhoon came through, and all I could imagine was how terrified one would have been to see this unfolding in front of them! One item of note – despite the strong winds and the debris falling from the roof, not one statue from the alcoves fell, and they are not harnessed down!!

We then went to the spot where the Pope Francis Centre for the Poor is being built to help orphans, seniors, and also serve as a medical clinic. Construction has just started, and Pope Francis will bless the Centre when he visits in January.

Up the hill from here is the home of Bishop Du. Now, I would say the house is about 40-50 metres up the hill, and His Grace told us that he walked from the Cathedral to his house after the storm passed through. When he arrived, he found that one side of his house had been destroyed! This part housed a Chapel, and the tabernacle fell to the ground. The Archbishop noted that there was no damage to the tabernacle; a crucifix fell on top of it, and the corpus protected the tabernacle from the Typhoon!!

The next morning we visited a number of Barangays, or electoral districts, in Tacloban. Most of these are near the water, and would have felt the impact of the storm surge head on. Along the waterfront were the remains of what were once resort homes. Just beyond this is now a sea of temporary shelters as people await the construction of permanent housing. The temporary homes are often tents or structures of wood and metal that have been fashioned into small structures. We celebrated Mass on a concrete slab that was once the floor of a house. As part of the Mass, relatives placed the names of their deceased loved ones on papers at the altar, and after the Mass the papers were burned and the ashes scattered into the water.

Through the organization, the Urban Poor Associates, Development and Peace has assisted in educating people on their rights to shelter and support from the government. This is in addition to relief funds provided to assist with emergency goods such as water, shelter kits, and food.

We then stopped to see two different ships that were tossed onto shore by the typhoon. As you look at the pictures, imagine what it would have taken to move these massive ships from the middle of the water onto the shore – and it happened in a matter of seconds!

In the afternoon we visited the Chancery office, and learned how the Archdiocese has assisted people in the Barangays by drawing up maps of what was once there, and the current situation. This is helping to assess the situation, and what is important is that the process is from the ground up – the affected people are involved in putting the plan together. The Archdiocese reviews the situation, and determines where they can help to provide resources. Development and Peace is assisting with the relief efforts in this area through humanitarian relief funding. While there we saw what was once the auditorium of the Seminary. The Archdiocese was asked to use the hall as an evacuation centre, and decided not to. They received criticism for this, but it was a prudent decision to since it was severely damaged in the typhoon.

On the way back, we stopped at a ‘bunk house’ which has been provided by the government.

While there, we met a lady whose husband was killed during the typhoon; they lost their home and have been relocated to this type of housing while they await permanent shelter. It was a moving experience…

The next morning we celebrated Mass at the Redemptorist Church. During the typhoon, 3,000 people sought refuge here, some for up to three weeks.

From here we travelled to Guiuan; along the way we stopped at a church in Balangiga which had its roof torn off by the typhoon. This church also has a history. In the early 1900’s, Filipino soldiers dressed as females attacked US soldiers in the area, killing many. The signal was the ringing of the church bells. Later, the US came back, and there were over 10,000 Filipino’s killed; the US soldiers took two of the church bells, which have never been returned. One is in Nebraska – apparently this is still a sore point over a century later.

Our last stop of the day was at Immaculate Conception church in Guiuan. This more than 300-year-old church was destroyed by the typhoon; only the walls remain. the roof caved in, and the front portion fell back into the church. Again, the parish priest was asked to use the church as an evacuation centre, and he decided against it, as the structure had been weakened by an earthquake a few years back. A smart decision!!

These two days gave me a chance to see firsthand some of the destruction from Typhoon Yolanda. To put it into words here does not describe the real situation that I have had the chance to see. Our support of Development and Peace with our relief funds for the Phiippines is helping to make an impact in the short and long term in these and other affected areas.