There is no home for the displaced in Mali 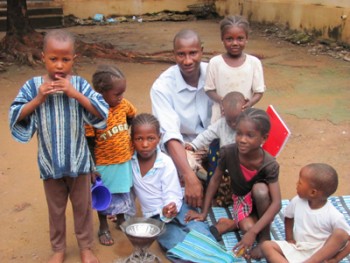 On my last day in Mali, I went to visit a centre in Bamako that is hosting 16 displaced families (98 people) who have fled the North of the country due to conflict there. Rebel groups have taken over several cities and have declared independence of this northern region, which stretches out towards the desert. In addition, some of the rebel groups are transforming the territory into an Islamic fundamentalist state by imposing sharia law. They have desecrated churches and even destroyed ancient mosques that they view as idolatrous. The violence and lawlessness that these groups have brought to the region have forced thousands to flee, either crossing the border into neighbouring countries or travelling south where the Malian government is still in control.

Most of the families that are staying at the centre are Christian and felt threatened by this wave of change, one which had previously not existed in Mali, which is 90% Muslim, yet where Muslims and Christians have co-existed peacefully for centuries. “The rebels pillaged churches. For us Christians, we don’t have the freedom to practice our faith,” said Pastor Aziz Cissé, who is staying at the site and helping to coordinate activities there. The centre, which is owned by the Archdiocese of Bamako, was given over to the families by the Archbishop, who told the families that they can stay there as long as they need to. With no end in sight to the conflict in the North, and discussions around a possible military intervention, it turns out this could be a very long time. Yet, for many who are at the centre, they want nothing more than to go home.

“As soon as I hear there is peace, I will go back. My heart is not calm. My heart is calm when I am at home,” Tawad Walet Infa said to me. A mother of nine, she fled her home in Timbuktu after hearing approaching gunshots. “I had time to put my youngest daughter on my back and to take another by the hand. We left with nothing but a thermos of water,” she told me. Her and her children walked 22 km to the river where a dugout canoe had been organized to carry families to safety in the south. “I lost my business and my house is now occupied by strangers.” Tawad is now living with her nine children in a small room normally used as a guest room for one or two people. She is using a cramped space on the porch as her kitchen. But she is grateful even for this tiny space. “If the Catholics hadn’t leant us this place, how would we get by?”

As I spoke with Tawad and Pastor Cissé, I realized how that very night, I would be embarking on a plane to go home, travelling thousands of miles to be reunited with families and friends, whereas for them, they could not even travel back to their homes just a few hundred miles away, and that the concept of home itself was becoming a faded memory. “We are like orphans with no mother and no father. We found ourselves in a jungle. There is no state, so we can’t go back,” said Pastor Cissé.

Caritas Mali, which provided food and other necessities such as medication to those staying at the centre, is now looking into how it can support the families with longer-term resettlement. “We want to return but we can’t. We have to integrate, we have to create openings,” Pastor Cissé told me. It’s a reality that is hard to accept, especially when home is so close yet so far.