There are 2.8 million Syrian refugees and each has a face and a name 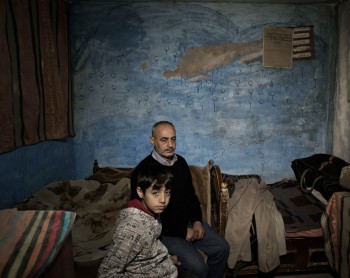 The conflict in Syria has been ongoing for over three years now, and it has forced 2.8 million to flee the country. It is a shocking number that makes us take a moment to reflect on the sheer number of people who have abandoned their homes to escape the violence. Yet such a large number can make us lose sight that it represents 2.8 million individuals, each with a name and a story, each who had a home and a history that was all left behind with only bits and pieces carried away in a suitcase.

June 20th is World Refugee Day and it is a moment where we would like to share with you just one of the stories amidst the 2.8 million others. Yahia Khaled is a father of five from a village near Aleppo, whose wife was killed in a bombing. He is now in Jordan and receiving support from Caritas Jordan, which is one of Development and Peace’s partners in the region.

Here is his story:

“My wife was killed when our village was bombed. She was working nearby. I fled to Jordan with my children,” he explains, still suffering from the shock.

Even if his children are silent, their eyes speak volumes about the tragic death of their mother. They are obviously in need of psychological support.

Yahia must not only cope with the loss of his wife, he is also suffering from cancer that requires medical treatment. It was virtually impossible for him to receive care in Syria because health services there have collapsed.

Even in Jordan, it’s difficult to find the painkillers Yahia needs. He could not receive the necessary help when he was staying in Zaatari, the sprawling refugee camp run by the United Nations where 130,000 Syrians live.

With the help of friends, Yahia found a place to stay with two rooms in Zarka, a town north-east of Amman. He must pay around 200 dollars (CDN) for rent, electricity and water. Caritas Jordan helps with his bills and provides him with the medicine he needs. Because of his illness, Yahia cannot take care of himself or provide for his children. His brother and grandmother also live in the small apartment and help out. He fights for his survival, but also for his family. They need food, medicine, soap, clothes, and bedding.