Ten Years after the Tsunami

In Emergencies
December 26, 2014
by
Jess Agustin, Programs Officer for the Philippines 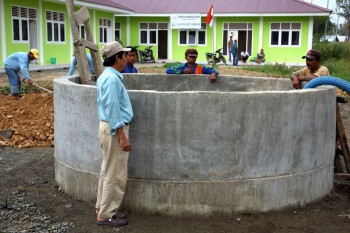 Ten years after the Tsunami that took place on December 26th, 2004, Development and Peace’s partners in Aceh, Indonesia were given the opportunity to look back and reflect on the many remarkable and inspiring accomplishments that were achieved during the reconstruction period that followed.

This reflection has been captured in the new book “Behind the Rosy Pictures,” which was launched at a solidarity gathering on November 30th, 2014 in Aceh that brought together all the partners that participated in Development and Peace’s Tsunami reconstruction program.

Before that gigantic wave engulfed Banda Aceh, the region was at the height of armed social conflict. It was an isolated and neglected region, where the presence of civil society was virtually non-existent. In the aftermath of the Tsunami, many of Development and Peace’s partners in Indonesia rapidly established themselves in Aceh to help in the response, but it was an extremely challenging context to work in. The demands were enormous, and due to the magnitude of the destruction and loss of lives, many humanitarian aid agencies descended into the field with massive amounts of funds, and began to implement responses that were short-term and grandiose in nature.

Yet, Development and Peace’s partners were still able to deliver impressive results, and these were achieved on time and within budget. This success, which has been internationally recognized, can be attributed to the long-term relationships of trust that were established between Development and Peace and its partners, as well as to the profound commitment and capacity demonstrated by these local partners in their reconstruction efforts.

In 2008, Development and Peace commissioned an external evaluation of its program, and some of the following conclusions were made:

“Development and Peace has attempted to inject aspects of its long-term, pro-poor, partnership model into its emergency relief work. In so doing, it has tried to reconcile and bridge the gap between emergency relief and long-term development. In its Tsunami response, these efforts are most evident in its targeting of the poorest and most socially marginalized populations for reconstruction; the participatory reconstruction approach culminated in the creation of people’s organizations which mobilized communities and advocated for the land rights of Tsunami victims; and support provided for organizational strengthening of new civil society in Aceh.”

The transition from emergency and reconstruction to long-term development programming was difficult for many of the partners involved. Many of them revisited and reviewed their mission, goals, capacities and resources in the new, post-tsunami context.

There were also repercussions. After two of years of intense emergency and reconstruction activities, the development programs of some these partners in other parts of Indonesia were affected. Others experienced serious institutional crises; many staff members suffered from exhaustion, and quite a number of organizations in and outside of Aceh simply disbanded.

Development and Peace continued to provide support to partners in Aceh (and the rest of Indonesia) in making this difficult transition. It was one of the few international organizations that committed to doing this, as many humanitarian organizations left Aceh quickly. Over the last 5 years, Development and Peace’s program in Aceh was fully dedicated to strengthening the newly established and renewed civil society organizations there as they faced even more complex, delicate and wide-ranging social issues (e.g sharia law, corruption and inequality).

How to discern the lessons learned

These partners realized that a traditional evaluation would not do justice to the accumulated wealth of experiences they had gained and would not fully capture the essential learnings from this period. This realization came about when the “Systematization of Experience” approach was introduced to these partners during a Development and Peace Regional Training that was facilitated by Óscar Jara Holliday, a Peruvian‐Costa Rican popular educator and sociologist, whose organization Alfoja was a Development and Peace partner for decades.

This approach became not only another technical tool, but also a dynamic participatory process for the partners to critically reflect among themselves - involving everybody in their organizations, from drivers to directors - on their actual practices in order to obtain meaningful learnings. Marsen Sinaga, Development and Peace’s In-country support staff person became a pioneer in promoting and practicing this process in Indonesia.

Through this process, Development and Peace’s partners were able to understand even more deeply their experiences and consequently adjust their work plans. There were able to exchange and share their learnings and apply them to similar experiences. They were able to influence policies from solid learnings that came from real experiences of exploitation and resistance.

The resulting book will be an added contribution to the body of knowledge of social movements around the world, and a rich resource for other organizations in Aceh, the international community and for the rest of Indonesia.

In this 10th year of commemoration of the Tsunami tragedy, Development and Peace would like to convey its solidarity and sincere expression of “Terimakasih” to all its partners in Indonesia with whom we collaborated in responding to this unprecedented humanitarian crisis. They have contributed in rebuilding resilient communities and people who are empowered, organized and committed to continue their work for justice, long-lasting peace and social change.

This is an adapted version of the preface of the book “Behind the Rosy Pictures.”

COVID-19 in India: an urgent appeal at an apocalyptic time
Read more