In Field visits, Members in action, News from our partners, Solidarity trips
July 5, 2014
by
Danny Gillis, Animator for the Atlantic Provinces 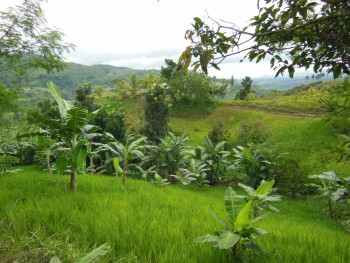 During a two-hour hike up a mountainside to visit the indigenous village of Dungkoong, we had a chance to visit a demonstration farm supported by the SAC. The farm is located on hilly terrain exactly like the land which area farmers own. On it a variety of staple food crops, including upland rice and cassava, are grown alongside vegetables, peanuts and numerous fruit trees: coconut, mango, cacao among others. Smaller trees and shrubs like banana, rubber and palm are planted to stop hillside erosion and begin the process of terracing. The farm’s tree nursery is growing enough native species of trees to plant 70 hectares a year. Farmers come to the demo farm to learn about intercropping and contour farming techniques and can also earn a wage by planting and caring for saplings from the tree nursery.

Upon reaching Dungkoong we were met by musicians, dancers and villagers who had come out to welcome their Canadian visitors. The village is populated by people of the T’boli indigenous tribe. During the Marcos dictatorship, the forests of Marbel were cut down and the timber sold to foreign countries for profit to those close to the government.  The people who suffered the most from this destruction were the indigenous people of Mindanao.

With the destruction of their forests, the T’boli can no longer rely on what was their traditional hunting and gathering lifestyle. They have to make the great leap into an agricultural economy if they hope to keep their land and make it productive. The SAC staff who accompanied us on our climb have just recently started working with the people of Dungkoong, assessing their problems and working with them to find solutions.

In a community meeting, the community leaders explained that one of their greatest problems is water supply. Their drinking water travels two kilometres from a mountain spring through a 1-inch diameter hose to arrive at an uncovered reservoir. They say if they could acquire 2-inch gauge tubing and a more sanitary reservoir system, their water problems would be solved. However, a project proposal submitted to the government has already been turned down.

With the help of the SAC and the continued support of Development and Peace, we hope that the T’boli people of Dungkoong can live in dignity and face their future with confidence.

The Philippines: Is consent too much to ask?
Read more

Mine unearths conflict in the Philippines
Read more