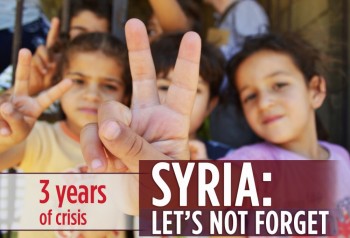 March 15th marks three years since Syria entered into a civil war that has had devastating impacts on the Syrian population and enormous repercussions on the entire region of the Middle East. This crisis shows few signs of abating, and the humanitarian needs continue to rise with each passing day that this crisis endures.

There have been more than 100,000 deaths and there are now 2.5 million Syrian refugees in neighbouring countries, half of which are children. At Development and Peace, we provided our first support to those fleeing in October 2012, contributing $50,000 to the work of Caritas Lebanon in providing basic necessities to Syrians who had left everything behind in their home country. Like most, we hoped it would be enough - that within a few months a ceasefire would be negotiated and stability would resume.

It soon became clear, however, that it would not be enough. The number of refugees continued to grow exponentially and by the beginning of 2013, we extended our support to the Caritas’ in Turkey and Jordan, which were also absorbing large numbers of refugees, and to local organizations in Syria itself, where power and food shortages were becoming a part of daily life.

In a span of only four months the number of refugees doubled, and in June 2013, we launched a joint appeal with the Canadian Conference of Catholic Bishops to be able to respond to what had become the worst humanitarian crisis of our time. Since then, we have continued to increase our support in the region.

Last January, in the lead-up to the Geneva II Peace Conference, we joined other organizations in calling for guaranted access to humanitarian aid; international donors to honour and even increase their commitments of foreign aid for Syria and countries in the region that are hosting millions of Syrian refugees; and the international community to cooperate with the Syrian people in support of a vigorous peace-building agenda. Sadly, this conference did not lead to any tangible paths for peace, and today, we continue to respond to the growing needs.

We recently began to work with Caritas Austria and other local organizations in Syria to provide food distributions and other services to the most vulnerable who have been displaced. In collaboration with the Department of Foreign Affairs, Trade and Developed Canada and the Canadian Foodgrains Bank, we are contributing over $7 million to humanitarian aid that is reaching 220,000 people.

We are grateful for this generosity and solidarity that Canadians have shown to be able to provide this support to those living through this continuously unfolding tragedy. But, if there is any glimmer of hope in this situation, it is the compassion that has been extended to those who are suffering, whether through a prayer or a donation here in Canada, to those on the ground living through their own difficulties yet giving themselves daily to help those whose pain is greater. And even those in Syria, at the heart of the devastation, have not given up hope.

In a reflection on the crisis, Msgr Antoine Audo, the president of Caritas Syria said the following:

“I would like to take this opportunity to send you a message on behalf of Caritas [Syria]. We wish to share our sorrows and joys with you. We wish to thank you. We wish to ask you to understand what’s happening in Syria. And we ask you to keep on believing in the possibility of peace and reconciliation… With our projects we try to look at reality objectively, and in our way of approaching people we aim to respect their dignity whoever they may be… Caritas, in the service of all Syrians, especially our Muslim brothers and sisters, those of different denominations and all ethnic groups, strengthens an attitude of true citizenship within us. Thank you to our Caritas supporters who accompany our efforts to build a fraternal society of mutual respect.”

In this spirit of hope, we ask you to not forget Syria or let it fade to the background. We invite you to share in the fruits of your solidarity by watching the following video about health clinics in Lebanon providing much-needed services to refugees.