Syria: Even in despair, there is hope

In Emergencies, News from our partners
January 9, 2015
by
Kelly Di Domenico, Communications Officer 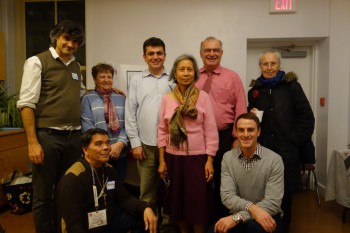 It is hard to imagine the situation in Syria becoming any worse than it already is, but on a recent visit to Canada, Fr. Nawras Sammour, Country Director for Jesuit Refugee Service (JRS) Syria, described in detail the continuing tragedy that is taking place in his home country - one which has been exacerbated by the arrival of Islamic militants along the border with Iraq.

At an event at the Our Lady of Lourdes parish in Toronto, he gave a moving and powerful testimonial of the current suffering of the people in Syria. In addition to the 3.5 million Syrian refugees living in other countries, there are currently over 7 million people within the country who have been displaced from their homes due to the conflict there, he explained.

“Some people have been displaced 6 or 7 times,” he said, delving into the terrible consequences of constant re-settlement, such as losing all personal belongings, overcrowded housing,  loss of education for children and the threat of hunger.

According to Fr. Sammour, another devastating impact of this ongoing war, is that Syrians have become immune to the violence around them. Whereas, in the past a shelling would cause people to shake in fear, today, it is simply a part of everyday life. For him, it is a worrisome sign that Syrians are losing meaning in the preciousness of life, and risk giving in to a certain fatality of no tomorrow.

For Fr. Sammour, however, not all hope is lost. As much as he is confronted with stories of despair on a daily basis, his work also provides him with moments that offer bright glimmers of hope that peace is possible.

“One time, the day after we served hot meals at one of our soup kitchens, a Muslim family came and brought a cake to the JRS staff for Christmas,” he recounted, clearly still touched by the gesture.

Peacebuilding is one of the main components of JRS’ programming and Fr. Sammour explained how all of the organizations activities seek to bring people of different religions and ethnicities together as a way to promote peace and tolerance.

For instance, through JRS’ educational activities with children, parents find themsleves together in informal settings to simply chat and socialize, causing them to lose sight of the differences that now divide the country.

Fr. Sammour also sees hope in the number of people that JRS is reaching with support from organizations like Development and Peace.

As much as the services themselves are essential, it is the way in which they are provided that makes a difference.  “We don’t just give handouts, we walk alongside the people,” said Fr. Sammour.

This is in part due to the fact that much of the staff and volunteers of JRS are refugees themselves, which allows for a sense of solidarity and empathy that helps maintain a sense of dignity in the face of so much desperation.

In fact, the compassionate approach of JRS Syria was recognized with the Pax Christi International Peace Award last spring.

Fr. Sammour has not been spared his own suffering. He has seen his home city of Aleppo demolished and divided. Much of his family has left Syria to seek opportunities elsewhere, and those around him wonder why is not done the same himself.

“Whenever, I travel, my staff always ask if I will come back. Of course, I will go back. I need to be with my people right now.”