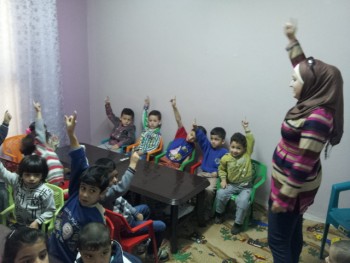 Laith Eskander is drinking his coffee. I am too. We need it! It must be only 10 C in the schoolyard of the Rome Catholic School in Amman, Jordan, where we are standing. Yet, the cold hasn’t stopped over 200 young adults from trickling into the yard to wait for their night classes to start. Most are Syrian, but there are also Iraqis, Sudanese, Somalis, Sri Lankans, Indonesians and others, I’m sure. They have come to learn either English or computer programming. The teachers have similar origins, but there are also British and American volunteers.

Jesuit Refugee Services (JRS), whom Development and Peace is supporting as part of its response to the crisis in Syria, has partnered with this school, a primary and secondary school for Jordanian children located in the Ashrafiyeh district of Amman, to offer courses to refugees outside of regular school hours. Early in the morning, there are preschool children who come, in the late afternoon, primary and secondary school students, and in the evening, it is adults. They even offer a superior education program that allows refugees to complete their university studies, although the diplomas have yet to be recognized. In all, JRS is serving 130 children and 700 adults through this program.

Laith, with whom I am drinking my coffee, organizes home visits. “Through word-of-mouth, I’ll learn that a new family has arrived, and will stop by to visit. I listen, I observe and I provide information on the services offered by various organizations. Often, there are health issues that need to be addressed immediately. I speak to them about school, which would allow their children to continue their education, but to also come into contact with other children.”

Laith is Iraqi. He arrived in Jordan in 2003, after the third Gulf War. He doesn’t want to return due to the ongoing violence and insecurity in the country. However, he is still not entitled to a work permit in Jordan because he has refugee status. Although he has managed well for himself, it is not the case for many of his peers, who either can’t find work or are forced to work occasional jobs, such as construction and domestic work, at low wages. The government will often tolerate work by refugees, but these workers do not have any legal rights or protection, which can open the door to many forms of abuse. Extending citizenship would provide safeguards, however, it is a highly sensitive subject in Jordan, where 27% of 18 to 35-year-olds are unemployed.

For the moment, the relationship between Jordanians and old and new refugees is good. Everyone I met, from taxi drivers to public servants, felt they should be welcomed. But the authorities want to reduce the pressure around the border with Syria, where there is a high influx. Despite the situation, we can still laugh together in the schoolyard, give each other pats on the back, and shake hands. The effervescence of a schoolyard is universal, but this one, on this cold November night, is particularly touching.