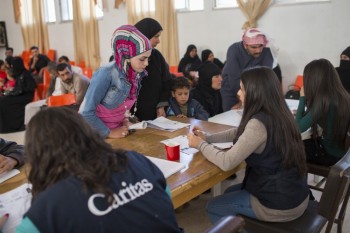 When I arrived at the Caritas Centre in Irbid, Jordan, there was a queue of about a hundred people waiting to register. Most are Syrians who have fled the civil war in their country, but there are also Palestinians forced to evacuate their refugee camp in Syria’s capital Damascus due to bombings. Why are so many waiting in line? Because the Caritas Centre, run by Caritas Jordan, is an important resource for refugees, providing housing subsidies, winter supplies (at noon it was barely 12 C), food coupons, medical and dental care, psychological support, training workshops and remedial classes for children so they can integrate into school.

Jordan is a land of immigrants. Since gaining independence in 1946, the country has experienced several waves of immigration, mostly due to instability in the region. It is also a country that is attractive for migrant workers, particularly those from Egypt and Southeast Asian countries, such as Sri Lanka and the Philippines.

One of the women waiting in line at the centre is a Syrian refugee. She is with her seven children who are between the ages of 2 and 15. From Syria, she and her children first passed through the Zaatari refugee camp in Jordan, but like many, they left the camp because the living conditions were too difficult. They eventually ended up in the city of Irbid, where the family rented an apartment with what little savings they brought with them - and which are now depleted. She has now turned towards the Caritas Centre for help.

Accompanying her is her neighbour, a Palestinian refugee who lives in the apartment above. She has come along in support of her Syrian neighbour, because the two women have become friends. Because she understands what it means to be a refugee, because when the monthly ration of rice runs out, she will give some of her own, because she forced her daughter’s school to accept her neighbour’s daughter as well. Often she is the one to be there, because she understands.

Development and Peace, in collaboration with the Department of Foreign Affairs, Trade and Development Canada, is supporting medical services to refugees in seven centres like this one run by Caritas Jordan. And we are not alone. Caritas Austria, Germany, Denmark, and others are supporting this work, which is essential for the thousands of refugees in Jordan who see little hope in going home.