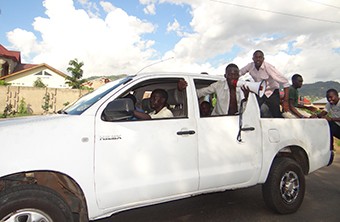 Burundi has been plunged in a political crisis since April 2015, when President Pierre Nkurunziza made the very controversial announcement that he would be allowed to present his candidacy for a third term. Thousands of Burundians have crossed the border into Tanzania in order to flee the political instability and violence that have paralyzed the economy and adversely affected the most vulnerable in the country.

Development and Peace has allocated $100,000 to support the efforts of its partners, Caritas Tanzania and Caritas Kigoma (a Catholic diocese in Tanzania), in eight refugee transit centres, located in the western part of the country.

Tanzania has received more than 135,000 refugees from Burundi, and more than half of those (around 78,000) have taken refuge at camp Nyarugusu, which only has an estimated capacity of around 50,000 people. Here they joined some 64,000 Congolese refugees who arrived in 1997, fleeing the civil war in the Democratic Republic of the Congo. The Nyarugusu refugee camp is overpopulated, services are overloaded, and humanitarian organizations are struggling to provide appropriate assistance to thousands of refugees.

Development and Peace and its Caritas partners of the Caritas network are helping to provide:

Development and Peace is closely monitoring the situation as it unfolds and is in constant communication with its partners from the Caritas network.

Development and Peace has been operating in Burundi since 1974. The organization is actively working on agricultural and land-related issues, as well as promoting democracy and citizen participation, through civic education activities, training observers to monitor human rights violations, and activities with young people living on the outskirts of the capital city, Bujumbura.

COVID-19 in India: an urgent appeal at an apocalyptic time
Read more