A Sunday in Bamako 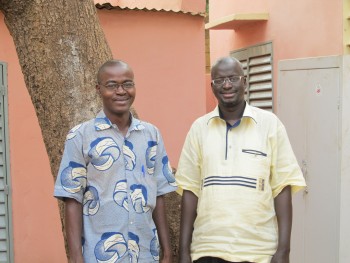 I spent my first day in Bamako with Gaston Goro, the Emergencies Coordinator at Caritas Mali, and Mamadou Diakité, an accountant with the organization. Caritas Mali was the first Caritas in the region to launch an appeal for aid to go towards the current food crisis here, but the response of the Caritas network – and the international community  -  has been slow. It is only now that the millions of people suffering from poor harvests due to weak rains and inflation on food staples (for example, the price of cereals like millet or sorghum has gone up by more than 25% in 6 months) are beginning to receive assistance.

I can sense there is some frustration. For the last two months, on the one hand we have been working with the Canadian Foodgrains Bank to finalize financing for projects, yet on the other, the population keeps asking when aid will come. There are concerns that the next rainy season will make it very difficult to reach isolated villages. Catholics barely represent 2% of the Malian population, but as is often the case, this group hold an important role in the areas of education and health.

It is true that the coup d’état of March 22nd, and the advances of different rebel groups in the North, have slowed things down here. You can feel it in the city, which seems to be moving in slow motion. The hotels are empty. In mine, there are perhaps five or six guests out of 72 rooms. At the Amitié Hotel, one of the most important in the city, 150 people were laid-off due to a lack of visitors.

That said, Bamako has changed dramatically since the last time I was here 15 years ago. There are new neighbourhoods and multi-floor buildings. Many of these investments were made by Gaddafi’s Lybia. The president of Mali is accused of embezzling funds destined for aid and from the export of gold (the country is the third biggest exporter of gold in Africa after Ghana and South Africa) to construct buildings ad buy private land. Since I’ve arrived here, no one seems to be lamenting the departure of the president and there is a deluge of stories about his regime. Yet, Mali was once seen as a model of democracy. Elections may be well-organized here, but clearly there needs to be more for the concept of power to change.