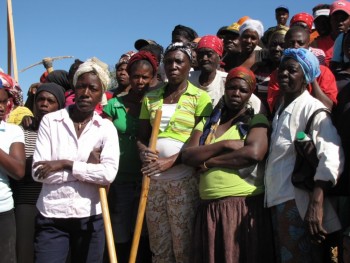 On the eve of the fourth anniversary of the earthquake that struck Haiti, there are neither particular preparations nor special expectations in the streets of Port-au-Prince. There are no plans on the part of civil society, and there are only rumours that the government will organize something to commemorate this sad event. But three days before the fateful moment, we still do not know what the nature or scope of this “thing” will be. Nobody has the heart for it anyway. For most Haitians, January 12th could very well be the day that follows January 11th, and life will go on, painful and unpredictable as ever. Maybe the fifth anniversary will be commemorated in a more meaningful way.

And yet, much progress has been made. Most strikingly, no doubt, is the street cleaning. This is not insignificant when we know that millions of tons of debris littered the streets and alleys, without the government or anyone else knowing how to clear it, let alone where to put it. But it was done! We can now move around, our only problem being the traffic jams, which, incidentally, give us time to notice that walls have been erected, and houses and buildings constructed. Port-au-Prince is no longer the city I knew two or three years ago, or even last year.

So why this self-imposed amnesia? Certainly, for those who have lost loved ones, their property, or the roof over their head, they will always remember the fateful day of January 12th, 2010; but there is no reason to wait until now to remember, as they suffer daily from the absence of a spouse, a child, a parent, and/or a friend. As the Chilean poet Pablo Neruda said, “Absence is a house so vast that inside you will pass through its walls and hang pictures on the air.” That is where the Haitian people hang their dead. But this atmosphere also reveals the extent to which fundamental questions faced by Haitian society have not yet been resolved. We are talking about archaic structures that impede economic recovery; corruption and incompetence that prevent the implementation of new initiatives; and impunity and privilege that flout the most elementary rules of life in society. We note that the situation in Haiti today is no better than before the earthquake, despite everything that has been restored.

Today, 1.3 million people have a home once again, a very respectable result indeed. However, an estimated 200,000 people are still living in camps that can no longer, unfortunately, be called "temporary"! One wonders, how many homeless people there were in Haiti before the earthquake. What has been done in the last four years to solve the housing, urban migration and land title problems, which, started well before 2010, and year after year, invariably produces tens of thousands of homeless people? Not much! Thousands of people now live permanently in “temporary” shelters, and placing the blame on the 2010 earthquake provides the perfect excuse to avoid directly facing the core of the issue. In fact, the "production" of homeless people is a consequence of the disruption of Haitian society, and no longer of tectonic plates.

So now we better understand why people are in no mood to celebrate – and why their heads are elsewhere. The more the reconstruction and recovery progresses, the more there is a return to the mistakes of the past, to the structural issues and fundamental injustices that allow poverty to persist. But, as Brazilian Archbishop Dom Helder Câmara once said, the poor no longer have the patience to wait.